Delivering babies to the wrong parents

Active
Mr. Stork is a minor character in the 1941 Disney film Dumbo and the 1952 cartoon short Lambert the Sheepish Lion.

Mr. Stork is seen after all the other storks have made their deliveries and the circus has already packed up and started its way to the next town. He stops on a cloud to check his map and almost loses the bundle (Dumbo) he was carrying by letting it fall through the clouds a couple of times. Upon hearing Casey Jr. (the engine pulling the circus train) blow his whistle, he descends onto the moving train and checks a few of the cars, only to find the wrong animal families and be scared by the lions and tigers. He manages to find his way, thanks to the sounds of the elephants from their car, having heard his calls for Mrs. Jumbo. Once inside, he finds her and delivers his bundle to its expecting mother, reciting two poems. He begins to sing "Happy Birthday" to the baby at first, not knowing its name and having to ask for it from his mother. Towards the end of his song, he gets caught by a railroad mail hook and finishes the song on a single drone as the train presses on. He is not seen throughout the rest of the film.

He later appeared in the Disney short Lambert the Sheepish Lion (albeit in a red uniform instead of blue). Here, he is both the narrator throughout the short and makes an appearance in the beginning. He is first seen delivering lambs to their flock and tells them to go find their mothers. All of the mothers receive a baby except one, and to Mr. Stork's surprise, a baby lion named Lambert was mixed into his delivery. Mr. Stork studies his paper to find where the lion cub belongs and learns (much to his surprise) South Africa. Lambert chooses one sheep to be his mother after seeing how happy the other lambs are. When Mr. Stork tries to correct it, he is promptly headbutted by Lambert's new mother. He then flies off, saying how rude she was and how this was not part of his job description, but lets her keep the lion cub anyway. He does remain as the story's narrator for the remainder of the short.

In the 2019 remake of Dumbo, Mr. Stork briefly appears in the scene where Dumbo is born to Mrs. Jumbo with a non-speaking cameo. The stork that appears during Dumbo's birth in the aforementioned scene is confirmed to be Mr. Stork in the Easter Eggs on Parade bonus feature.

Mr. Stork's likeness can be seen on the Dumbo the Flying Elephant ride in Disneyland In Fantasyland.

In Florida, a figure of Mr. Stork was seen holding Dumbo in the former Celebrate A Dream Come True Parade at the Magic Kingdom.

In Japan, Mr. Stork can be seen on the signage of the Baby Mine children's store in Fantasyland at Tokyo Disneyland. Inside the shop, a decorative figure of Mr. Stork is displayed near the window (during the park's Easter egg hunts, an egg of Jim Crow is hidden beside Mr. Stork).

Mr. Stork as seen atop the Dumbo Flying Elephant Ride at Disneyland California

Mr. Stork on the sign for the Baby Mine at Fantasyland from Tokyo Disneyland 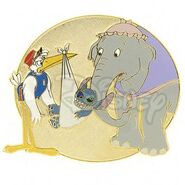