Disney Wiki
Register
Don't have an account?
Sign In
Advertisement
in: Dark rides, The Adventures of Ichabod and Mr. Toad, Disneyland attractions,
and 4 more

Mr. Toad's Wild Ride is a dark ride at Disneyland which was one of the few remaining attractions operational on the park's opening day on July 17, 1955. Its story is based on Disney's adaptation of The Wind in the Willows, one of the two segments of the feature film The Adventures of Ichabod and Mr. Toad.

It was once an attraction in the Magic Kingdom at Walt Disney World Resort, but despite a long protest against its closure, Mr. Toad's journeys to nowhere in particular were put to an end on September 7, 1998 and it was replaced the following year with The Many Adventures of Winnie the Pooh. However, a statue of Mr. Toad can be seen with many others at a pet cemetery outside The Haunted Mansion. Also, paintings of characters from Mr. Toad's Wild Ride with characters from The Many Adventures of Winnie the Pooh can be seen on the latter portion of the ride.

Corey Burton does every voice in the Disneyland attraction, except for the demons, voiced by Candy Candido.

Guests enter a recreation of Toad Hall, passing by artistic works commemorating characters from The Wind in the Willows. A large mural shows the adventures of Mr. Toad and his motorcar, foreshadowing various scenes in the ride. Guests hop aboard miniature early 1900's-era multi-colored motorcars. The name of one of the characters from the film (Mr. Toad, Ratty, Mole, MacBadger, Cyril, Winky, or Weasel) is inscribed on the front of each one.

Passengers begin their journey by crashing into Toad Hall's library, where Angus MacBadger is seen teetering atop a ladder with a stack of books. They then careen through the fireplace, where fiberoptic effects simulate the scattering of embers on the floor. Narrowly avoiding a falling suit of armor, the passengers break through a set of doors to find the interior hallway of Toad Hall in disarray, as Weasels swing from chandeliers. Guests then enter the dining room, where Mole is eating at a dinner table and gets knocked aside.

Upon leaving Toad Hall, guests travel through the countryside, passing Ratty's house, aggravating policemen, and terrifying a farmer and his sheep. Making a right turn, guests head for the docks and get the impression that their car will plunge into the river, but quickly make a sharp turn in a different direction and enter a warehouse full of barrels and crates containing explosives. Guests crash through a brick wall as the warehouse's contents explode.

They then head out into the streets of London, avoid a close collision with a delivery truck and enter Winky's Pub, where Winky the bartender holds two spinning beer mugs. He ducks down, leaving the mugs spinning in the air.

Passengers then enter the town square, where the cars wreak further havoc on the citizens. A working fountain featuring Mr. Toad and Cyril Proudbottom stands in the center of the town. Behind this statue is a statue of Lady Justice peeking out from under her blindfold. Next, guests enter a jury-less courtroom, where the riders are proclaimed guilty by a judge (based on the film's prosecutor). The cars then enter what is presumed to be a dark prison cell before abruptly turning right and landing on railroad tracks. The cars bounce along the tracks in the dark before colliding head-on with an oncoming train.

Guests then arrive at the ride's final scene: a tongue-in-cheek depiction of Hell not inspired by any scene in the movie or book. The entire room is heated and the scenery features small devils who wiggle up and down. A large devil, who resembles the Judge from the courtroom scene, emerges and points guests to the left (the devil's/Judge's right), indicating "redemption". Near the end of the scene, a towering green dragon emerges and attempts to burn the riders to a crisp. A glowing light is seen in the back of its throat and we hear choking, coughing noises.

Granted the reprieve from the demon judge, the passengers eventually "escape" to the unload area, where they disembark.

Mr. Toad's Wild Ride in Florida was one of the Magic Kingdom's opening day attractions on October 1, 1971. Although it was modeled after the Disneyland attraction, it had some unique characteristics that set it apart from its California counterpart. The most obvious was that the Florida incarnation had two separate boarding areas. The vehicles (in the form of multi-colored motorcars) in each one were on separate tracks that followed different paths, so riders would get a slightly different ride, depending on where they boarded.

Like its counterpart at Disneyland, it was not a thrill ride, but it was not slow and quiet like most dark rides. The vehicles made sudden turns and would often move at full speed towards an obstacle, which would move out of the way at the last second. At one point, the ones on the different tracks would head directly towards each other, giving the sense of an oncoming collision.

It was a very stylized attraction and resembled a cartoon more than any other Disney ride. It contained highly ornate plywood characters and sets that were very reminiscent of the multiplane camera work featured in many Disney films.

Despite its popularity and many protests, it closed on September 7, 1998, and was subsequently replaced by The Many Adventures of Winnie the Pooh.

While minor tributes to the ride can be found throughout Walt Disney World, including paintings of Mr. Toad and Moley within The Many Adventures of Winnie the Pooh and a statue of Mr. Toad in the pet cemetery outside The Haunted Mansion, traces of "The Wind in the Willows" characters within Walt Disney World are minimal.

Efforts have been made to reconstruct the ride, including a 3D virtual recreation at virtual-toad.com.

The two tracks of the Walt Disney World version didn't pass through all of the same show scenes. Thus, each track gave riders a completely different set of spaces to pass through.

On Track #1, riders passed through the rural English countryside upon leaving Toad Hall's library, coming face to face with a few barnyard animals along the way and crashing through a chicken coop filled with squawking chickens. After passing through a tunnel with several warning signs, guests made a turn into a central plaza. Traveling around the turn, the vehicles passed a policeman signaling riders with his whistle. Guests then made a right hand turn into the jail as the judge declared the riders guilty. Upon making a right hand turn, the vehicles entered several jail cells. After winding through the cells, guests emerged out into a dark scene, passing by a shootout between police and some Weasels (using red lights to simulate gunfire). Several of the police barriers then moved aside, revealing a railroad crossing complete with a ringing bell. The gate then moved aside and the vehicles made a right hand turn onto the tracks. The vehicles traveled along the railroad tracks until getting hit by a train (with riders seeing the headlight of the locomotive). A door then opened, revealing the "Hell" scene. Afterwards, guests went through a door and arrived at the station.

From the boarding area to the plaza, Track #2 passed through three scenes not seen on Track #1: Toad's trophy room, Toad Hall's kitchen, and a Gypsy camp. After rounding the plaza, instead of entering the Jail, guests continued on and entered Winky's Tavern. The vehicles made a right hand turn and guests could see the Weasels hiding out in the Tavern among the ale barrels. Following this, guests emerged into the countryside. Passing by Ratty's house, the vehicles reached a railroad crossing complete with a ringing bell. It moved aside and the vehicles made a left hand turn onto the railroad tracks. Like on Track #1, the headlight of the locomotive was visible before the train hit the riders. The "Hell" scene on this track was a mirror image of the Track #1 sequence. Afterwards, guests went through a door and arrived at the station.

Mole at the Magic Kingdom version

Hell in the Magic Kingdom version 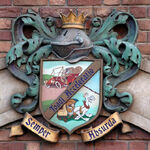