Mrs. Chicarelli, Kick (in "Nerves of Steal")
Mr. Vickle is Kick's next door neighbor. A heavyset middle-aged bachelor with an effeminate personality. He's one of the few adults that isn't ruffled by Kick's behavior (except in "Nerves of Steal" where he's really sure that Kick's the person who has been stealing personal items from him and his neighbors). He is afraid of Mrs. Chicarelli, who seems to dislike him due to him having no problems with Kick. 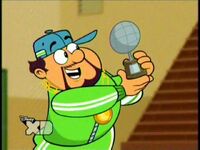 Retrieved from "https://disney.fandom.com/wiki/Mr._Vickle?oldid=3486975"
Community content is available under CC-BY-SA unless otherwise noted.