Mr. Whiskers is Weird Girl's beloved pet cat. He is a persian cat that has white, fluffy fur and large eyes. Weird Girl claims that whenever he dreams about someone, something "big" happens to that individual. Mr. Whiskers is usually quiet and has a tendency to stare unblinkingly at people, much like his owner. However, he seems to enjoy taunting the neighborhood dogs, such as Sparky. The one person he seems to show any actual affection towards is his owner, a sentiment she readily reciprocates.

Before his mutation, Mr. Whiskers would usually stare at others unblinkingly, and would occasionally meow. When he sees a dog, he appeared angry. At one point, he appears to taunt Sparky, causing Sparky to chase him. He also appears somewhat mischievous, and was obedient to Weird Girl, bringing her a dead animal, a bat, when she told him to.

After his transformation into the Vampire Cat, his personality was radically altered. Originally quiet, Mr. Whiskers was now loud and dangerous. He didn't listen to Weird Girl anymore, and hissed at her, though he never attacked her as he did with everyone else, hinting he has some memories of her. Mr. Whiskers appeared to specifically attack dogs now, and was no longer afraid of Sparky and tried to kill him. He seemed to take joy in scaring people, slowly crawling after Elsa and Persephone, and was very quick and fast. He would attack suddenly and unexpectedly, and was rather impulsive, quickly attacking Victor. His hatred of dogs would be his downfall, however, as he attacked Sparky rather than escape the burning windmill, which collapsed and killed both him and Sparky.

After school, Weird Girl went to talk to Victor while holding Mr. Whiskers. There, Weird Girl explained her prediction that Mr. Whiskers was a psychic because he would leave droppings in the shape of a letter that would be the first letter in someone's name. She explained Mr. Whiskers did this three times before. He did it with Bob, who later fell in a hole, he dreamed of Toshiaki the day he pitched a perfect baseball game, and dreamed of Nassor, who was knocked out while playing the umpire. Weird Girl tried to give the dropping to Victor, who refused the offer and rode away on his bike. When he left, Weird Girl shook Mr. Whiskers in the air and asked him if he would dream of her. The cat remained silent.

Something big did happen that day. At Victor's baseball game, Victor's dog Sparky was hit by a car and died. Heartbroken, Victor reanimated Sparky and kept him hidden in the basement. However, Mr. Whiskers snuck over to the house and started to taunt Sparky. Sparky retaliated by chasing the cat to Mr. Burgermeister's lawn, where Mr. Whiskers climbed up the house, but not before knocking down Burgermeister's plastic flamingos.

After Sparky was discovered, the other children immediately tried to bring their dead animals back to life. Unfortunately, their experiments went wrong and the dead animals were mutated. Toshiaki's turtle became the Turtle Monster, Edgar "E" Gore's dead rat became the Were-Rat, Nassor resurrected the Mummy Hamster, and Bob created the Sea Creatures. Weird Girl decided to resurrect an animal as well, and Mr. Whiskers brought a dead bat to her and convinced her to resurrect that. Unfortunately, Mr. Whiskers began playing with the bat when the lightning struck, so her experiment went wrong too, and Mr. Whiskers was electrocuted. When Weird Girl checked to see if he was alright, Mr. Whiskers grew fangs and his fur became darker, confusing Weird Girl. As his owner looked on, Mr. Whiskers twirled around and became thinner and larger. His tail and legs extended, and as he sat up, his neck extended as well. Going down on his front legs, Mr. Whiskers sprouted bat wings in front of Weird Girl. With no memory of his past, the mutated cat destroyed the room and flew out the window, followed by Weird Girl.

Mr. Whiskers flew to the science fair where the other monsters had been destroyed. As Weird Girl called to him, Mr. Whiskers flew towards Elsa Van Helsing's dog Persephone and grabbed onto her, and flew away with her in his grasp. Both Elsa and Victor chased after them while Sparky ran away to get the angry mob, who chased after him, thinking he took Elsa. Elsewhere, Mr. Whiskers had taken Persephone to the windmill and Elsa followed and grabbed Persephone. Elsa climbed up the stairs while Mr. Whiskers crawled up after her, and flew up and hit her in the head, causing her and Persephone to fall and were hanging from the edge of the windmill. When Victor came to help, Mr. Whiskers knocked him down and started to attack him, but Sparky bit his arm. The cat flew up with Sparky and freed himself, and the two animals fought each other.

Elsa and Persephone fell and grabbed a rope, and swung to safety. With them rescued, Victor turned his attention to Mr. Whiskers and Sparky, who were fighting on the top of the windmill, and Sparky nearly fell off while Mr. Whiskers flew in the air and tried to grab him. Sparky slid to Victor and Mr. Whiskers tackled Victor and the two tumbled into the windmill, which had been set on fire. Sparky ran down and found the two, both unconscious. Sparky dragged Victor outside and left Mr. Whiskers. As everyone cheered that Sparky saved Victor, Mr. Whiskers recovered and flew out of the windmill, grabbing Sparky by the tail and dragging him back inside to continue their battle. Though Sparky attempted to defend himself, Mr. Whiskers quickly gained the upper hand and cornered Sparky against a wall. However, as Mr. Whiskers prepared to attack, a wooden stake became dislodged from the ceiling and plummeted towards Mr. Whiskers, impaling him through the chest. Giving a shriek of agony, Mr. Whiskers finally died of his injuries just as the flaming windmill gave away and collapsed on both him and Sparky, killing him too. 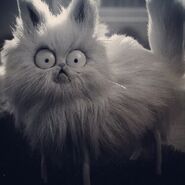 Mr. Whiskers after his transformation into the Vampire Cat

Mr. Whiskers with the weird girl

Mr. Whiskers in Captain Sparky vs. The Flying Saucers