"This invention is brilliant!"
Mr. Willerstein is a character from Disney's 2007 film Meet the Robinsons.

Mr. Willerstein first appears during a montage of Lewis inventing the Memory Scanner to which he agrees in which Lizzy finds Lewis' plan to invent boring. He then gives Lewis a flyer for the InventCo Science Fair to which Lewis is interested in participating to make him a good inventor.

Meanwhile during the science fair at the gym, Willerstein talks to Lucille Krunklehorn about having her as the judge of the science fair to know whose project is the best to which she shows him Stanley and his scene of Mount Vesuvius to which the gym coach explains that Stanley's project is unacceptable. Willerstein and Krunklehorn walk up to Lizzy and her fire ant farm to which he explains that fire ants are dangerous as they are capable of biting to which she explains that her ants are only capable of biting her enemies. Willerstein continues walking around the gym to look at the other science projects and then approaches Lewis' invention telling him that the project should not explode or Lewis will fail at the fair. Lewis then tells the other students, along with Dr. Krunklehorn and the gym coach to stand back because of Lewis' special invention, while Lewis does not notice DOR-15 messing up Lewis' invention. The invention, however, was not a success at first because of the Bowler Hat Guy and DOR-15's devious plans causing a disaster in the gym. Lewis talks to him about his invention which was a failure to which he explains that he shouldn't talk to him as he's busy telling everyone to leave the gym.

Later after Lewis fixes his future, he returns to school where he tells him that he needs another chance to participate to which he agrees to which Lewis shows his invention once again to which Lewis' project was a success in the science fair. Mr. Willerstein and the gym coach praise Lewis for his success in the science fair as a news reporter tells Lewis that he had a bright future ahead of him after his success. 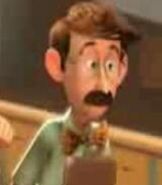 Retrieved from "https://disney.fandom.com/wiki/Mr._Willerstein?oldid=3843243"
Community content is available under CC-BY-SA unless otherwise noted.