Her children being happy, being there for her children, cleaning

Andy growing up, not being listened to

Minivan (with license plate number A113)

Mrs. Davis (also known as Andy's Mom and Ms. Davis) is a minor character in the Disney•Pixar Toy Story films series. She is the single mother of Andy and Molly Davis. It is unknown what happened to her husband, who is never even seen or mentioned.

Not much is known about Mrs. Davis prior to the Toy Story franchise, only that she has two children (Molly and Andy) and a "lost" husband.

Mrs. Davis is a very loving and devoted parent who establishes fair rules for her children. However, like any parent, she often argues with Andy and Molly.

She carries brown hair and blue eyes in the first two films, and later blonde hair in the third film. She also has a slender physique.

In the first film of the saga at Andy's 6th birthday party, she has brown hair tied in a high ponytail and wears a pink T-shirt, aqua pants with roses printed all over her leggings, and navy ballet flats. On her trip to Pizza Planet for dinner with Andy and baby Molly, she wears a white T-shirt, green vest with sunflower heads all over, and the same amount of pants and flats. At bedtime, while she kisses Andy goodnight, she wears a cream shirt with tulips printed all over, blue skin-tight pants, and the same color amount of flats. On her moving day with the Eggman Movers, she wears a light aqua shirt with flowers printed all over while she drives with Molly and a worried Andy to their new house in her minivan. At Christmastime, she wears both a lavender shirt and pants and the same color amount of flats.

In the second film of the saga, on her camping trip with 8-year-old Andy and 3-year-old Molly, she has short brown hair and wears a lime T-shirt, blue jeans, and white sneakers. In the end, on her other trip to summer camp with her children when Andy spots Woody and the toys, including Jessie, Bullseye, and the Little Green Men, she wears a teal T-shirt, gray dress pants, and same color amount of sneakers.

In the third film of the saga, while she is about to donate Andy's toys to Sunnyside Daycare, she now has short hair dyed in golden blonde and wears a blue shirt, white unbuttoned overshirt, blue jeans, and brown ballet flats. In the end, on Andy's departure to college when she bursts into tears and hugs her son goodbye, she wears a teal V-neck T-shirt and a white shirt from the inside that almost shows her breast cleavage, blue jeans, and same color amount of flats.

In Toy Story, Mrs. Davis makes her first appearance. As the family is moving to a new house the following week, she holds Andy's birthday party a week early to accommodate the move. During the party, Andy's favorite toy, Woody, sends Sarge and a platoon of other green army toys downstairs to alert the other toys of new gift arrivals. However, Mrs. Davis briefly interrupts their plans when she accidentally steps on one of the soldiers, damaging it in the process. Annoyed, Mrs. Davis brushes them aside with her foot before proceeding to the living room.

When the gift-opening sequence is nearly over, Mrs. Davis bring out one more surprise gift, which is a Buzz Lightyear action figure. The green army men, including Andy and his friends, are surprised by the new toy. The excited group of kids race upstairs to play with the new toy before Mrs. Davis calls them downstairs for games and prizes.

Two days before the move, Mrs. Davis prepares to visit Pizza Planet with her children and tells Andy he can bring only one toy with him. This causes Woody to accidentally throw Buzz out of the window, making Andy choose him instead. While making their way to Pizza Planet, Mrs. Davis stops for gas and eventually continues the ride, unknowingly leaving Woody behind.

When Woody and Buzz finally arrive at Pizza Planet, they notice Andy and his family passing by and Woody makes a plan to jump in Molly’s stroller, but are delayed and missed since Buzz leaves to do something else.

When the family returns, Andy notices Woody is missing, too, and Mrs. Davis assures him that they’re most likely around somewhere, most likely in the car (unbeknownst to her that they are next door at Sid's house).

The next night, after some packing, Mrs. Davis attempts to look for both Buzz and Woody but cannot. Mrs. Davis tells her son of her results, and all she could find was his hat. This disappoints Andy deeply.

Mrs. Davis drives her car during the move and pays no attention to the events going on in the background. Later, Andy alerts his mom by telling her that Woody and Buzz were, in fact, in the car all along (although they were not).

At the end of the film, it is Christmas time, and Mrs. Davis gives Andy a puppy as a Christmas present, which makes Woody and Buzz feel uncomfortable.

In Toy Story 2, Mrs. Davis returns has slightly aged. She is heard alerting Andy that he has cowboy camp very soon, and has about five more minutes before leaving. Andy takes this time to have one last playtime session with his toys before accidentally ripping Woody’s arm open. Mrs. Davis, confused, questions why Andy is not in the car yet and realizes that Woody’s arm has ripped. She suggests that they could fix him on the way, but Andy decides to leave him behind. Mrs. Davis tells Andy that not all toys last forever, and the family drives off, leaving Woody shelved.

The next day, Mrs. Davis prepares for a yard sale. Woody then alerts the toys so they can have time to prepare. They quickly hide as Mrs. Davis enters Andy’s room and starts gathering old and unused toys, one of them being Wheezy. Because of this, Woody calls for Buster and the two attempt to save Wheezy before he is sold. Although they succeed in saving the toy penguin, Woody is left behind by accident, and is picked up by a little girl, who pressures her mom to buy him. The mom refuses and throws the rag doll on a table, and is found by the excited Al, who wants to buy Woody. Mrs. Davis is confused, as she has no memory of bringing Woody down to the yard sale, and takes him out of Al’s hands. Al then states that he will pay fifty dollars for the toy, but Mrs. Davis assures him that it’s an old family toy and she will not sell him at any price, and she locks Woody inside a metal case. Al prepares to leave, before distracting Mrs. Davis and quickly steals Woody and drives off.

When Woody returns home with some new friends, Andy immediately thinks that Jessie, Bullseye, and the little green men were given to him as gifts from his mother, although it was made to appear that way. He quickly thanks his mom, and begins to play with them.

The following morning, Mrs. Davis prepares to leave, and is happy to see that Andy has fixed Woody’s ripped arm. He then tells his mother he's glad that he didn't take Woody to camp, as his whole arm might've come off. In the end, Mrs. Davis is seen watching Molly take steps towards her, as she jokingly asks Andy if Molly is ready to drive.

In Toy Story 3, a visibly older Mrs. Davis makes her final “present-day” appearance. In the beginning, she is seen filming Andy with his toys throughout the years as he slowly grows up.

Present-day, Mrs. Davis pressures Andy to get ready for college by packing up or throwing away his belongings. When she finds his old toys, she suggests he either donate them or sell them online, but Andy refuses both options. Before leaving his room, she tells him that whatever isn’t packed before going to college will be thrown away. Ultimately, Andy decides to take Woody to college with him and store the rest of the toys in the attic.

Later, Mrs. Davis trips over Andy’s bag of belongings he originally planned to put in the attic. Thinking that the bag is full of trash, she mistakenly throws it away, alongside her own garbage, and leaves the bags on the curb. Thankfully, the toys escape on their own, and Woody attempts to save them during the process.

When the toys believe they were actually intended to be thrown away, Jessie comes up with the idea that they should donate themselves to Sunnyside Daycare, and hop in the donation box in the back of Mrs. Davis's car. She then proceeds to drive off with the donations, and drops them off at Sunnyside, where she is greeted by her old friend, Mrs. Anderson. She then acknowledges Bonnie's presence and tells her how big she has gotten.

While packing later in the evening, Andy looks in the attic for his toys but cannot find them there. He inquires his mother, who is gasps in shock as she realizes her mistake--the trash bag contained Andy's toys. She explains to Andy that she had unwittingly thrown them away, much to his disappointment. Mrs. Potato Head sees the events unfold from an eye she left in Andy's room and the toys realize their misunderstanding.

At the end of the film, Mrs. Davis helps Andy grab his belongings for college, and asks him if he had said goodbye to Molly yet. But when Mrs. Davis enters his empty room, she immediately starts tearing up and tells Andy that she wishes she could always be with him. Andy assures his mother that she will, before Buster and Molly enter the room for a final goodbye to Andy. During that time, Woody quickly writes a note on the box (in which the toys are in), telling Andy to donate them to Bonnie Anderson. Andy then asks his mom from down the hall if he really should donate his belongings, before she says it’s all up to him.

In Toy Story 4, Mrs. Davis has her smallest role out of all of the Toy Story films. She briefly appears at the beginning of the film during a flashback segment nine years before Toy Story 3. During a rainy night, an unnamed man turns up as a guest at her home whom she invites to collect Bo Peep's lamp set from Molly's room. She doesn’t appear throughout the rest of the film. 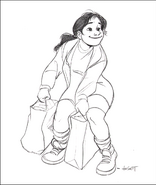 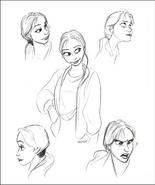 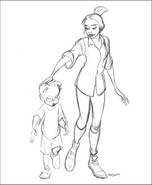