To see her son happy

Mrs. Gleeful is first seen in "Little Dipper". All she does is vacuum the floors of the Gleeful household while muttering, "Just keep vacuuming" whenever Gideon acts out. When she was seen for the first time, she was vacuuming the kitchen floor, then the living room sitting on the couch. She appears to be scared of Gideon and barely talks.

She seems to be afraid of Gideon, even though he is her own son. It is unknown if her neurosis is caused by Gideon. 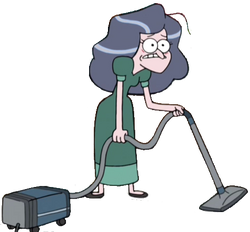 Mrs. Gleeful has long, frizzy gray hair with horizontal white streaks through it. She wears a green dress and has wrinkles on her face. She also has very pale skin. She's always seen wielding a vacuum cleaner or mumbling to herself. She bears a resemblance to Mother Gothel from Tangled.

Retrieved from "https://disney.fandom.com/wiki/Mrs._Gleeful?oldid=4122545"
Community content is available under CC-BY-SA unless otherwise noted.