Disney Wiki
Register
Don't have an account?
Sign In
Advertisement
in: Characters, Phineas and Ferb characters, Disney characters,
and 16 more

Unnamed poodle
Mrs. Johnson who allegedly also goes by the nickname "Hawkeye" Johnson,[3] is a recurring character on the animated series Phineas and Ferb. She is the mother of Jeremy Johnson and Suzy Johnson and wife of Jack Johnson. She is the sister-in-law of Joe Johnson and probably the daughter-in-law of Hildegard. She is also related to Annabelle. She is in the Free-Form Jazz Band alongside Linda Flynn-Fletcher and Vivian Garcia-Shapiro. She has appeared several times (mostly in background shots).

Suzy and her mother have yet to be seen interacting but it is safe to assume that she is unnaware of Suzy's darker personality.  Its also assumed that Suzy is close with her mother as well.

It appears that Jeremy and his mother are quite close and Jeremy often helps her with anything animal. ("Misperceived Monotreme", "Bad Hair Day")

She gets a good impression of Candace after she "saved" a tangerine orangutan which happened to be Heinz Doofenshmirtz covered with Candace's hair. ("Bad Hair Day") 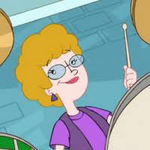