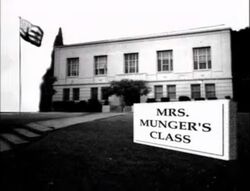 "Mrs. Munger's Class" is two seasons of brief, 90-second skits on Disney's One Saturday Morning on ABC that featured the talking heads of a middle school yearbook page. The kids in the photos would often exchange silly dialogue and insults, while Mrs. Munger would tell them to "Simmer down! Simmer! Simmer!" The camera would focus on whoever was speaking on one part of the yearbook page and quickly pan to follow the dialogue. Students would move between the pictures to interact with one another. The show was in black and white, but color was used on occasion (on field trips or to show cosmetics).

Directed by animator Tim Maloney, and produced by Disney for the One Saturday Morning children's programming block on ABC, the skits used Adobe After Effects and Photoshop computer software to manipulate photographs from a school yearbook. With the aid of computer animation that superimposed facial expressions, the photographs would appear to move their lips as the characters spoke dialogue. The skits ran for 18 months during the 1997-98 season, and during the fall of 1998, until a class action lawsuit was brought against Disney over the use of actual school portraits used to create the characters.

Although the school portraits used in the show were manipulated, collaged, and otherwise altered, the plaintiffs in the class action lawsuit felt that there was still too much resemblance. As such, the plaintiffs claimed the photographs were used for entertainment without personality rights clearance. Mrs. Munger turned out to be Mrs. Kathleen Foresman, who had been a teacher at Woodbridge Middle School in the Washington, D.C. suburb of Woodbridge, Virginia, in 1975 when her picture and those of her 6th grade students were taken for a page in a yearbook. She, and four of her former students, filed suit against Disney on December 23, 1998.[1] Edward Jackson, a computer engineer in San Diego, had learned that his likeness was being used after his 10-year-old niece brought the similarity to his attention. Jackson, a black man, was outraged only at the use of his photo.[2] The lawsuit was settled for undisclosed damages. 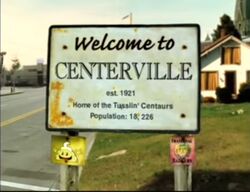 After Mrs. Munger's Class ended its run, Centerville aired, based upon the same student-photo premise. Unlike its predecessor, the characters in Centerville were not bound to the page of a yearbook and appeared in various settings. This series, however, was short lived.

Retrieved from "https://disney.fandom.com/wiki/Mrs._Munger%27s_Class?oldid=3894720"
Community content is available under CC-BY-SA unless otherwise noted.