Tattling
Ms. Chicarelli is Kick Buttowski's next door neighbor who really hates children (though it has never been stated why in the series). She is one of the main antagonists on Kick Buttowski: Suburban Daredevil. She loves peace, silence, brutality, and a world without kids. She has a dog called Oskar. In "Tattler's Tale", she tells Honey Buttowski lies about Kick because she hates him and wants to see Kick punished, but then Kick rallies some of his friends and even foes to thwart their common enemy Ms. Chicarelli. She is a secondary antagonist in Season 1 and a primary antagonist in Season 2.

In the episode "Detained", before she retired she used to have the record for giving the most detentions in Mellowbrook Elementary School history. 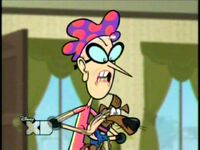 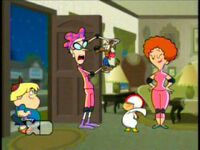 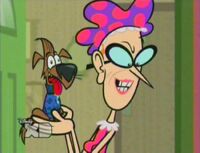 Retrieved from "https://disney.fandom.com/wiki/Ms._Chicarelli?oldid=3986375"
Community content is available under CC-BY-SA unless otherwise noted.