Ms. Marvel is an upcoming American streaming television series, created by Bisha K. Ali for Disney+. It is an adaptation of the Marvel Comics of the same name, and set within the Marvel Cinematic Universe, centering on the eponymous character, Kamala Khan/Ms. Marvel. It is expected to be the sixth, Disney+ original series, featured in the Marvel Cinematic Universe, and the first, starring a new character. Ms. Marvel is produced by Marvel Studios, with Bisha K. Ali, serving as the showrunner.

Ms. Marvel is set to premiere in 2022.[7] It will be part of Phase Four of the MCU. Like the other Marvel series, produced by Disney+, it will be tied into the wider universe, with Ms. Marvel's role, in the upcoming Captain Marvel sequel, The Marvels[8].

However, Kamala struggles to fit in at home and at school — that is, until she gets super powers like the heroes she’s always looked up to. Life is easier with super powers, right?[9]

In May 2018, Kevin Feige announced upcoming plans in an interview, to incorporate Ms. Marvel into the Marvel Cinematic Universe.[25] On August 23, 2019, at D23, Kevin Feige confirmed, that a Ms. Marvel series was set to be developed, starring Kamala Khan, and revealed on November 8, 2018, to be on the new streaming service Disney+, along with seven other Marvel series.[26] Variety reported that the first season would contain six episodes.[4] The episodes are developed, for a one hour format.[1]

Following the outbreak of the coronavirus, production on Ms. Marvel, as well as all projects within the Marvel Cinematic Universe, was halted, and expected to resume in September, 2020, pushing the expected release date back.[29][7]

It was later reported that theoretical physicist, Clifford Johnson, was hired as a consultant, for the series. His credits also include Thor: Ragnarok, Avengers: Infinity War and Avengers: Endgame.[30]

Prior to the beginning of filming, Production Weekly released a small blurb, detailing what Ms. Marvel would entail of:

"The show will center on Marvel’s first Muslim superhero to star in her own comic book title. Ms. Marvel as a comic and heroine has existed since 1976, with the character Carol Danvers using the name for her crime-fighting escapades. The latest incarnation, and the one the show will be focusing on, is a teenager named Kamala Khan. Khan broke ground by becoming Marvel’s first Muslim character to be lead her own comics title. Her identity as a Pakistani American, living in a religious family in New Jersey whilst trying to find her own way, have been a major focus of the stories. Her powers have been described as polymorphous, meaning she has the ability to stretch and change her shape."[31]

The series hired SILA Consulting for advice on cultural representation.[32]

At D23, following the Marvel Studios announcement they were developing a series about Ms. Marvel, Bisha K. Ali was reportedly set to write and act as showrunner.[26] Her credits also include Loki. Freddy Syborn was hired as a writer for the series.[28] A.C. Bradley, of What If...?, also serves as consulting producer and writer.[33]

Sarah Finn, Krista Husar, and Molly Doyle were announced as casting directors for the series, with Gregory Korn and Djinous Rowling acting as casting assistants.

Auditions for the titular character, began with the start of production. On September 30, 2020, Iman Vellani was announced to have been cast in the titular role.[10] A sizzle reel was released by Marvel, showcasing her being told she had been announced as the lead, on Zoom. Following the release of Ms. Marvel's sizzle reel, the starring cast members, were revealed on the official Marvel website.[3]

On November 1, 2019, casting went underway for the rest of Kamala Khan's family[34], as well as another character, code-named, "Birdman", speculated to be, Marvel Comics character, the Inventor.[35]

On February 11, a casting call was released for two Muslim, male actors between the ages of 17 and 25, for the Marvel Comics characters, Red Dagger and Kamran.[36]

On August 10, 2020 it was reported that a male and female character were being cast, code named, Omar and Willow, and speculated to be Amir Khan and Nakia Bahadir.[37]

On September 28, 2020, a casting call for four new characters (The Sheikh, Fariha, Aadam and Auntie Ruby), were released.[19] In December of 2020, the casting for Sheikh Abdullah, Muneeba Khan and Nakia Bahadir were revealed.[14]

On February 19, 2021, Laurel Marsden was reportedly cast as Zoe Zimmer.[17] On the same day, Alyy Khan confirmed he would also be part of the cast, in an interview.[24]

On Instagram, Laith Nakli revealed on Instagram, that he Alysia Reiner, had joined the cast in an undisclosed role.[21]

Production was expected to begin, sometime in April 2020, in Atlanta under the working title "Jersey".[39]

It was confirmed, that Ms. Marvel would be underway next spring of, April 2020.[31] On December 7, 2019, it was revealed by Feige that production was expected to end by the end of 2020.[40] On February 3, 2020, production was to be delayed, until in August, with the Ms. Marvel shoot only expected to last about four months.[41] According to Charles Murphy, production was delayed, once again, and expected to begin to begin in sometime in November, through to March, 2021.[42]

On November 10, 2020, it was reported that series began filming.[43] Filming in Atlanta was finished by March 2021, with production heading to Bangkok next.[44] Living Films served as the production services company, and Chris Lowenstein as the line producer, whilst in Thailand. Sets were constructed at the Studio Park facilities, south east of Bangkok. Despire a resurgence of the coronavirus, that imposed new restrictions in the city, the production company were able to obtain a waiver, and continue filiming, under strict protocols. On May 11, 2021, Variety reported that production had officially ended.[4]

Directing duo, Adil El Arbi and Bilall Fallah were hired to direct at least one episode of the series.[1] The Hollywood Reporter reported that Sharmeen Obaid-Chinoy and Meera Menon will be directing episodes of the series.[2]

Christopher Glass serves as the production designer. On November 11, 2020, it was reported that Arjun Bhasin would serve as costume designer for the series.[7]

At the 2020 Disney Investors Day, Marvel released a sizzle reel, containing the first officially released footage, for the series, as well as input from crew members involved in the project. On March 2021, concept art of the series, created for toy manufacturers to base their products on, were leaked online.[45] On May 10, 2021, The Disney Store, released the first official merchandise for the show, in the form of a shirt, with the series' logo. On August 2, 2021 a cardboard cutout standup, had been released, of Iman Vellani, as Ms. Marvel, revealing the first official look of the character.[46]

Ms. Marvel is expected to be released in late 2022, though as of yet, no specific date has been announced.[6][47] It will consist of six episodes.[4] It is expected to be the ninth entry in Phase Four, of the MCU, and the sixth Disney+ original, by Marvel Studios.

Ms. Marvel was intially expected to be released in 2021. Prior to the announcement of Hawkeye's release date, Ms. Marvel was listed as being released, after What If...?, on the official Marvel website.[48] 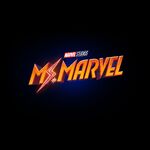 Ms. Marvel on set for her TV show.