Soapy baths, being clean, going on a time out, cats

RoseBud (sister)
B-Dawg (brother)
Budderball (brother)
Buddha (brother)
MudBud is a golden retriever puppy who appears, along with his brothers and sister, in the Air Buddies film series.

MudBud is the filthiest of all the Buddies, hence his name. He wears a blue handkerchief for a collar and usually ends his sentences with "Dude." He likes rolling in dirt patches and hates getting soapy baths. In Snow Buddies, the white snow he was trudging through washed away all the mud on his fur, much to his dismay. Luckily, when the Buddies arrived back in Fernfield, MudBud rolled in a patch of dirt to make his fur look like the way it used to be. He lives in Fernfield, Washington, with his famous all-star father, Buddy, and mother, Molly. His owner is Pete, a boy who was at first addicted to handheld video games, until MudBud taught him how to loosen up and be more outgoing. 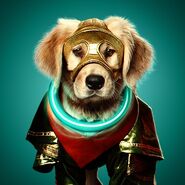