Still standing
Mudka's Meat Hut is a local diner from The Emperor's New Groove franchise. The restaurant primarily sells meat products, but also sells other food like potatoes and salad.

The restaurant was founded by Major Mudka who invented the Meat Mug recipe, 50 years ago.

Kuzco and Pacha stop here to hide from Yzma and Kronk, unaware that they have also stopped there for a meal. Because the restaurant doesn't allow llamas inside, Kuzco is disguised in drag and pretends to be Pacha's wife on their honeymoon. There, the frustrated cook has Kronk take over the cooking while Yzma gets suspicious about the "married couple" that are Kuzco and Pacha in disguise. As Pacha warns Kuzco about Yzma and Kronk's suspicious plans, Pacha asks the waitress Mata to distract Yzma with a surprise party in order to escape. As the waiters humiliate Yzma and Pacha and Kuzco leave the restaurant, Pacha explains that the reason why the two must escape is because Yzma and Kronk are not trying to save Kuzco but trying to kill him. During the conversation, Kuzco and Pacha argue with each other again just as Kuzco refuses to accept his trust just as Kuzco leaves the restaurant sadly and slowly finds himself sulking in the jungle.

Kronk is now the head chef and delivery boy at the diner. At the climax of the story, Papi shows up there to see if Kronk is married. However, many of Kronk's friends end up pretending to be "Mrs. Kronk" and “Kronk’s adorable kids”(even those who ARE kids) with Pacha pretending to be “Chicha’s mother, Pachita” before the cheese Kronk had been cooking blows up and the restaurant becomes covered in melted cheese. The others are shown cleaning up the place while Kronk’s dad is confronting him.

Another restaurant "Mudka's number 12 is seen in several episodes. Malina's best friend Yatta works there as a waitress, and it is shown she only works there for the money (she's a vegetarian) and that her family's been waitresses at Mudka's. Kronk is also shown to be working there as chef and delivery boy, like in the second movie.

The entrance to the restaurant.

The restaurant covered in melted cheese. 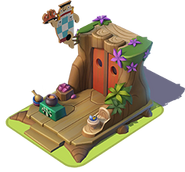