Once Mulan was dressed for her meeting with the Matchmaker, Fa Li placed a white flower styled hair piece in her hair, believing that she is ready to bring honor to their family before Grandmother Fa gave her granddaughter a few other items to help her. Mulan, however, messed-up and the Matchmaker told her that she'll never bring honor to the Fa family. As she cleaned herself up and removed the accessory from her hair, she headed to the Fa family garden. Fa Zhou saw that his daughter was upset, so he tried to cheer her up by telling Mulan that she'll someday bloom like the late blossom in their garden's blossom tree, before placing the hair piece back in her long, dark hair, bringing a smile to Mulan's face.

When Mulan decided to take her father's place in China's war with the Huns, she placed the hair comb slide by her parents' bedside before cutting her hair, putting on her father's armor, and then riding off on Khan's back. Once Zhou found it, he got up to check on his now missing armor, and then rushed out into the rain to call for his daughter. The comb slipped right out of his hands as he fell onto the wet ground.

Mulan putting her comb on her father's bedside.

The comb on the ground.

The comb in Mulan II 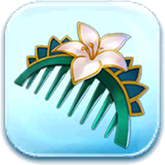 The comb in the live-action film