September 26, 2014
"Mumbai Madness" is the twenty-sixth episode of Mickey Mouse.

Mickey embarks on an epic odyssey across India after his taxi picks up an elephant who needs to make one simple stop.

Inside a train station in India, Mickey whistles as he cleans a three-wheeled car. An elephant holds up an image of a mountain, and Mickey gives him a ride. He turns on an upbeat Hindi song and the elephant happily dances. The auto stops behind a buffalo, and the elephant gets an idea: he changes the song to Bollywood dance music and the buffalos copy his dance moves, giving him and Mickey the chance to escape.

17 hours later, Buzzie, Flaps, Ziggy, and Dizzy see them driving, and they stop. Mickey sighs and tells the elephant to give him a map. He examines the map but they get chased by King Louie, Flunkey, and Bandar-log, and they drive all over the country.

As crows fly towards the sun, the auto runs out of gasoline, but the elephant eats the spiciest curry and orange sparkly smoke emerges from his ears. He steals the curry and fills the engine with it, causing the auto to speed up. The auto flies to the top of the mountain, splashes into the water and auto sinks. The elephant is sad but Mickey spots the temple, so the elephant gives him a flower to him and disappears, laughing. Mickey sees the elephant statues, and the wind blows the flower into the water and the petals open to reveal an enchanted golden auto with wings. Mickey is pleasantly surprised and drives off, laughing happily. 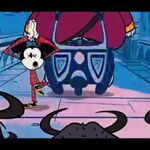