Getting teased, having his toy wrecked

Teeth, tail
Munchy Beaver is a character on PB&J Otter. He is known in particular for two things -- his semi-obsession with wood and his nervous behavior, often lacking self-confidence. This shy, bashful nature sometimes makes him a target for teasing from Flick, though Flick rarely means to actually be cruel to Munchy.

Munchy lives at home with his mother, Betty Lou Beaver. The name of Munchy's father is unknown. He possibly works somewhere far away from Lake Hoohaw, as Munchy indicated in "Collector's Edition" that his father sent him a shark tooth. In "Munchy's Sinking Feeling," Munchy stated after his boat was wrecked that his dad chewed it for him and he's had it since he was born. Sometimes, his friends call him "Munch". Munchy idolizes Bucky Spacebeaver, a fictional hero that he sometimes reads about in comics. 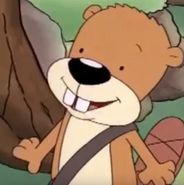 Excited about his adventure with Aunt Nanner 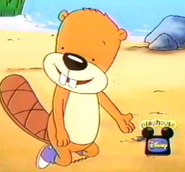 Retrieved from "https://disney.fandom.com/wiki/Munchy_Beaver?oldid=3656166"
Community content is available under CC-BY-SA unless otherwise noted.