Muppets Most Wanted is a 2014 American musical comedy film, and is the sequel to the 2011 film The Muppets. It was announced in March 2012 that Disney was moving forward on the project with James Bobin (director of The Muppets) and Nicholas Stoller (co-writer of The Muppets) writing the screenplay. Bobin also returned to direct the film.

Filming began in late January 2013 at Pinewood Studios in London. Principal photography in London wrapped on April 16, 2013 and filming moved to Los Angeles in May 2013.

The film, a "comedy caper" set in Europe, was released on March 21, 2014 to generally positive reviews and modest commercial success.

Following on from the ending of their last film, the Muppets find themselves at a loss as to what to do next ("We're Doing a Sequel"). Per the suggestion of their new tour manager Dominic Badguy, the Muppets decide to embark on a world tour. Meanwhile, Constantine, the world's number one criminal and a complete dead ringer for Kermit, escapes from Siberian Gulag 38B, before making contact with Badguy, who turns out to be Constantine's subordinate; a position Constantine frequently reminds him of.

Arriving in Berlin, the Muppets intend to play a shabby venue, but Badguy secures them a show at a more prestigious location. Becoming increasingly frustrated with the rest of the Muppets' ludicrous requests for the show and Miss Piggy's insistent hints at marriage, Kermit takes a stroll to calm down at the suggestion of Badguy. However, he is ambushed by a hooded Constantine, who slaps a fake mole on Kermit's right cheek, making him resemble Constantine. Constantine escapes and Kermit is arrested and taken to the Gulag in his place.

Constantine meets up with the rest of the Muppets, all believing him to be Kermit, except Animal, who bites him. Constantine and Badguy review their plans ("I'm Number One"). The Berlin performance opens with Constantine freezing at the sight of the large audience and Scooter has to introduce the show. Later, Constantine and Badguy sneak off to steal a selection of paintings from a nearby museum. Meanwhile, after being locked in the Gulag ("The Big House"), Kermit makes multiple escape attempts, all of which are thwarted by Gulag prison guard Nadya, who then orders Kermit to help organize the annual prison talent show. Reflecting on his time with the Muppets, Kermit gains the inmates' respect. Meanwhile, on the train, Constantine wins over Miss Piggy ("I'll Get You What You Want (Cockatoo in Malibu)").

The morning after the burglary, Interpol agent Jean Pierre Napoleon and CIA agent Sam the Eagle begrudgingly form an alliance to apprehend the culprit, who Napoleon identifies as his nemesis "the Lemur", after discovering a coin-based calling card. Following instructions hidden behind one of the stolen paintings, Constantine and Badguy divert the course of the Muppet tour to Madrid as part of a plot to steal the crown jewels of Great Britain. Constantine informs the rest of the Muppets that they are permitted to perform any act they wish, much to the suspicion of Walter.

The Muppets perform in Madrid whilst Constantine and Badguy steal the next set of instructions to steal the crown jewels, destroying many busts in the process. In spite of a disastrous performance ("Macarena", a prolonged Electric Mayhem drum set) that puts the audience to sleep, the Muppets' performance receives critical acclaim. Sam and Napoleon deduce that the connection between the crimes in Berlin and Madrid is the Muppet tour, and the pair interrogates the Muppets - to little success ("Interrogation Song"). As the tour reaches Dublin, Walter discovers Badguy to be paying critics to write positive reviews, and Fozzie Bear realizes the resemblance between Kermit and Constantine. Fozzie and Walter discover that Constantine is on the train posing as Kermit and that Badguy is in on the scheme. Constantine sees that they have found him out, and attacks them, but Animal fends him off, and the three of them manage to escape by hopping on another train. They then figure that the best course of action is to go to Siberia and rescue Kermit.

At the climax of their Dublin performance ("My Heart Will Go On"), Constantine proposes to Miss Piggy, who accepts with the pair intending to marry at the Tower of London. Arriving in London, Constantine and Badguy conspire to use the wedding as a distraction while Badguy uses a locket stolen in Dublin, with the assistance of Bobby Benson's Baby Band, to steal the crown jewels. Before the wedding, Piggy contemplates her impending marriage and future with whom she assumes is her true love, Kermit ("Something So Right"). Fozzie, Walter, and Animal arrive at the Gulag and inform Kermit of Constantine's plot. The four use the prison show ("Working in the Coal Mine") as a front to escape along with the rest of the prisoners, and they head to London, much to Nadya's dismay.

The wedding gets underway and Badguy disables the security systems to the crown jewels, successfully stealing them. Kermit interrupts the wedding ceremony, revealing Constantine to be nothing more than an impostor. Constantine escapes with Piggy as his hostage. Arriving at their helicopter, Constantine comes across Badguy (revealed to be the world's number two criminal "the Lemur" while donning a lemur costume) with the Imperial State Crown, before Badguy announces his intent to double-cross Constantine. Constantine responds by ejecting Badguy from the helicopter and taking flight with Piggy. Kermit intercepts and the rest of the Muppets use a "Muppet ladder" to stop the helicopter in its tracks, with the help of an irate Piggy.

Constantine and Badguy are arrested. After arriving in London, Nadya attempts to arrest Kermit once more for initiating the prison escape and "breaking her heart." The rest of the Muppets express to Nadya that if Kermit is arrested. Then so shall they be. Nadya relents, deciding Kermit belongs with them and drops the charges. The Muppet tour concludes at the Gulag where Constantine and Badguy are part of the prison show ("Together Again (Again)"). Nadya, apparently having been promised a solo by Kermit, prepares to sing but is cut off by the film's "The End" logo.

Featuring never-before-seen material that extends the film an additional 12 minutes, the following is exclusive to the version available on the two-disc Blu-ray release and Digital HD:

Although not as well received as the first film, Muppets Most Wanted still garnered positive reviews. It currently holds a 80% rating on review aggregator website Rotten Tomatoes; the general consensus states: "While it may not reach the delirious heights of The Muppets, Muppets Most Wanted still packs in enough clever gags, catchy songs, and celebrity cameos to satisfy fans of all ages." 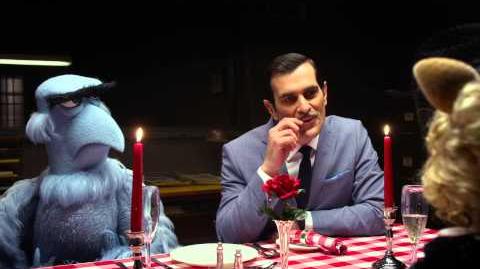 The Disney Wiki has a collection of images and media related to Muppets Most Wanted.