Disney Wiki
Register
Don't have an account?
Sign In
Advertisement
in: Article stubs, The Muppets, Television series by Disney,
and 7 more
English

Muppets Now is an unscripted short-form series developed for Disney+. It was released on July 31, 2020.

Muppets Now takes place on Scooter's Computer where Scooter rushes to make his delivery deadlines and upload the brand-new Muppet series for streaming. They are due now, and he’ll need to navigate whatever obstacles, distractions, and complications the rest of the Muppet gang throws at him. Overflowing with spontaneous lunacy, surprising guest stars and more frogs, pigs, bears (and whatevers) than legally allowed, the Muppets cut loose in “Muppets Now” with the kind of startling silliness and chaotic fun that made them famous. From zany experiments with Dr. Bunsen Honeydew and Beaker to lifestyle tips from the fabulous Miss Piggy, each episode is packed with hilarious segments, hosted by the Muppets showcasing what the Muppets do best.

Muppets Now consist of many segments, or shows, such as game shows, interviews, cooking, science, and lifestyle with celebrity guest stars, like RuPaul.

In February 2018, it was announced by The Hollywood Reporter that Disney has plans for a "reboot" for the Muppets on Disney+. A search for a writer was in-progress.[1]

In February 2019, "Splash Report" reported that the series would be called Muppets Live Another Day and featured Josh Gad with a story that came after the events of The Muppets Take Manhattan.[2]

In May 2019, The DisInsider presented a series of ten-minute Muppet shorts that would take the formats of game shows, cooking shows and talk shows.[3]

It was officially announced on The Muppets' social media accounts that Kermit the Frog and Joe the Legal Weasel announced Muppets Now, an unscripted short-form series with celebrity guest stars.[4]

This series had received mixed-to-negative reviews by critics and audiences. Most of the reviews were upset that Disney fired Steve Whitmire who provided the voice of Kermit the Frog until 2017 and replaced him with Matt Vogel who voiced Constantine from Muppets Most Wanted. Some were also unhappy with the modernization themes that the series provided with the Muppets storing video footage of the segments on a computer while being quarantined at their apartments. 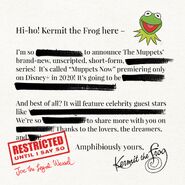