Three Orphan Kittens
Music Land is a Silly Symphony that debuted on October 5, 1935. Along with Symphony Hour, the short was released on the Walt Disney Mini Classics and Disney Favorite Stories VHS releases of Peter and the Wolf.

The short begins by showing a map of Music Land, before zooming in to show the Land of Symphony. The Land of Symphony is a classical-themed kingdom, where the princess (an anthropomorphized violin) grows bored with the slow ballroom dancing and sneaks out.

Across the Sea of Discord, the Isle of Jazz is a jazz-themed kingdom alive with hot jazz music and dancing, but the prince (an alto saxophone) takes little interest in it. Sneaking out, he spots the princess across the sea with the aid of a clarinet-telescope, and instantly falls in love with her. He quickly travels across the sea on a xylophone boat to meet her.

Their flirting is interrupted, however, when the princess' mother (a cello) of the Land of Symphony sends her guards to lock the prince in a metronome prison tower. To escape this predicament, he writes a note for help (the melody of The Prisoner's Song) and passes it to a bird, which brings it to his father (a baritone saxophone), who raises the battle cry - a jazz version of the military tune Assembly (bugle call).

The Isle of Jazz deploys its multi-piece band as artillery, bombarding the Land of Symphony with explosive musical notes to a jazz/swing number. The Land of Symphony returns fire via organ pipes that rotate into cannons, launching musical interceptors to the refrains of Wagner's The Ride of the Valkyries like the 4th of July Fireworks.

The princess intervenes to stop the war by waving the flag of surrender, but falls into the sea when a symphony note hits her boat. The prince struggles to escape his cell, but an explosive note helps him by landing next to it and blowing it up, and he rushes to save her, but ends up struggling as well. Both parents see what is happening, and quickly cease fire to rescue their children. When they finally save their children, separate them from each other, and start to glare at each other, the king starts taking a liking to the queen, and decide to make peace via handshake. The story ends on a happy note with a double wedding, between the prince and princess, and the king and queen, presided over by a double bass minister, as the citizens of both lands dance on the newly built Bridge of Harmony and a rainbow with musical notes all over appears over it in the sky. 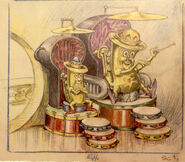 Retrieved from "https://disney.fandom.com/wiki/Music_Land?oldid=3748261"
Community content is available under CC-BY-SA unless otherwise noted.