Music Land is a package film produced by Walt Disney and released to theaters by RKO Radio Pictures on October 5, 1955. It was the final Disney animated film to be distributed by RKO. It was also the last package film produced by Disney until The Many Adventures of Winnie the Pooh in 1977, following Saludos Amigos, The Three Caballeros, Make Mine Music, Fun and Fancy Free, Melody Time, and The Adventures of Ichabod and Mr. Toad. Like The Many Adventures of Winnie the Pooh and Academy Award Review of Walt Disney Cartoons, each of the cartoons had been released on its own at first before being fused together as one film. The separate cartoon shorts are now available on DVD.

Although Walt Disney Productions had established its own film distribution firm, it still owed RKO one more feature film under the existing contract. In order to fulfill that final film commitment, Disney took a combination of four sequences from Make Mine Music and five from Melody Time to create a new compilation film entitled Music Land.

The poster boldly declared it was "The Big Parade of Mirth and Melody!" The film was never shown again except once at a retrospective “Tribute to Walt Disney” at the National Film Theater in 1970. There are no home video releases of the entire film available.

The film contatined the following sequences: 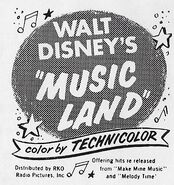 Retrieved from "https://disney.fandom.com/wiki/Music_Land_(film)?oldid=3807433"
Community content is available under CC-BY-SA unless otherwise noted.