Music in Your Soup

"Music in Your Soup" is a song originally intended to feature in the film, Snow White and the Seven Dwarfs.

During the song, the dwarfs, led by Happy, sing as they eat soup, slurping noisily. Grumpy is the loudest eater of all. Snow White teaches them how to eat 'like gentlemen' by using a spoon. The dwarfs use their spoons after this, but still slurp noisily. Dopey, in his enthusiasm, manages to swallow his spoon by mistake. After several failed attempts to retrieve it, Happy kicks both the spoon and the soap (which Dopey swallowed during "Bluddle-Uddle-Um-Dum") out of Dopey and the dwarfs cheer.

The song would originally have occurred immediately after the washing sequence and was considered for usage in a short subject sequel to the film titled Snow White Returns that ended up being cancelled.

The scene, in its pencil test form since it never went to color, was first presented on the Disneyland episode "The Plausible Impossible", preceded by the washing sequence, to set up context. It also appeared in the Golden Anniversary of Snow White and the Seven Dwarfs special.

An instrumental version of this song can be heard in the queue area of the Seven Dwarfs Mine Train attraction.

Heard near the start of the album, Walt Disney presents The Story of The Seven Dwarfs and Their Diamond Mine, Robie Lester sets up the re-purposed context of “Music in Your Soup.” It is sung by Thurl Ravenscroft (Tony the Tiger/You’re the Mean One, Mr. Grinch/Grim Grinning Ghosts), Bill Lee (The Sound of Music/South Pacific/Hey There, It’s Yogi Bear!) and Bill Kanady, a highly sought-after Chicago and Hollywood studio vocalist, choral singer and member of The Jack Halloran Singers.

With a gulp
With a grin
Get a wiggle on your chin
You can make things hum with a zum, zum, zum
Of the music in your soup

Let her rip!
Let her roar!
To the first and the second
And the third encore 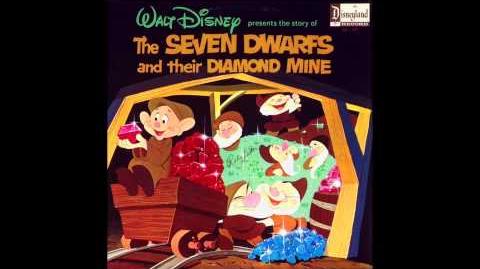 Retrieved from "https://disney.fandom.com/wiki/Music_in_Your_Soup?oldid=4533801"
Community content is available under CC-BY-SA unless otherwise noted.