The Mutant Toys (sometimes referred to as Sid's Toys) were supporting characters who appeared in the first Toy Story. They were built by Sid from mixed pieces of several toys that belonged to him and Hannah. They lived in his house, hidden in the dark corners of his room.

When Woody and Buzz Lightyear first encountered them, they saw them dragging Hannah's Jane Doll and Sid's toy Pterodactyl away and the two thought they were cannibals who were going to eat them, especially when they blocked the escape route for the duo. Holding Buzz as a hostage, Woody pushed the button on his back to make his arm chop to back them away as they tried to escape after Buzz realizing that his laser isn't working after aiming it at the mutant toys as he is still unaware that he is a toy.

However, when the mutant toys later placed Buzz's severed arm back in place, as well as taping the heads of Hannah's Jane doll and Sid's toy Pterodactyl back to their correct bodies, Woody was stunned to see that they were not cannibals as he had initially thought them to be. After Sid took Buzz (whom he had strapped his new rocket to) outside to be blown up, the mutant toys agreed to cooperate with Woody in his plan rescue Buzz from Sid's clutches while also seeing this as their own chance to get revenge on him. Working together, they first drove Sid's dog, Scud, who had stationed himself outside Sid's room, away and out onto the front porch so they could safely escape into the backyard. Once outside, they moved into their final positions, from where they emerged out, surrounding Sid, as Woody told him how much they don't like being mutilated and that they'll find out if he didn't take good care of his toys because "we toys can see everything." After Woody scared Sid away with his own voice, "So play nice," and caused him to retreat in fear of his own toys (considering everything he had done to all of them), they all rejoiced victoriously and Buzz thanking Woody for saving him, but the celebration is cut short as Woody and Buzz witness Andy's mom's car leaving Andy's old house next door as Woody and Buzz start to leave Sid's house as the mutant toys are last seen seeing Woody and Buzz leave for Andy's car as Woody and Buzz bid farewell to the mutant toys.

The Mutant Toys have made several non-walkaround appearances in the theme parks.

One of the games in DisneyQuest's Create Zone was Sid's Toy Maker, which allowed guests to create their own mutant toy and purchase the parts to actually build their creation.

At Hong Kong Disneyland, large statues of the Mutant Toys are installed to decorate Toy Story Land for the Halloween season.

Leader of the mutant toys. He is constructed with a one-eyed baby doll head attached on the top of a spider-like body made from an erector set.

Ducky is a duck head PEZ dispenser atop a baby doll torso with a plunger base. Unlike the rest of the mutant toys who can't speak, Ducky makes duck noises.

Fastest of the mutant toys. He is a tin wind-up frog that had all but left front leg missing. From the back, his frog legs are replaced with mismatched wheels.

He is a Frankenstein-like hand stuck on the spring of a jack-in-the-box. The spring was actually the same model of Slinky's.

Jingle Joe is a toy based off a Melody Push Chime with Combat Carl head on top. He has a severed Mickey's arm attached to his right.

Legs is a toy mixed with pair of fashion doll legs attached to a toy fishing rod.

Pump Boy is mentioned by Woody as he makes a plan, but it is unknown what toy he is.

A strange combination between three toys; Rocky Gibraltar, Combat Carl, and an unknown housefly/mantis hybrid. The arms from Rocky's torso are use to walk on it's with Carl's torso atop controlling Rocky's legless body with a steering wheel. His Carl's head was being replaced by a unconfirmed insect.

Roller Bob is composed of the torso of a pilot action figure screwed to a mini school skateboard.

He is a 1957 Hot Wheels car with wheels replaced by baby doll arms.

The Frog and Walking Car

A mutant toy that didn't make it into the final film 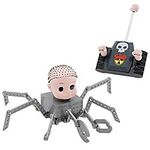 Add a photo to this gallery
Retrieved from "https://disney.fandom.com/wiki/Mutant_Toys?oldid=3920722"
Community content is available under CC-BY-SA unless otherwise noted.