18
My Friend Duffy (マイ･フレンド・ダッフィー) is a stage show that is being played at Cape Cod Cook-Off at the Cape Cod section of American Waterfront at Tokyo DisneySea. The original version debuted on March 20, 2010. The updated version debuted on January 20, 2014, during Sweet Duffy and ended on January 9, 2017. The third version, featuring Duffy's friend Gelatoni, began on February 2, 2017.

On a TV screen played before the show, TippyBlue introduces himself and briefly summarizes the story of Duffy.

At her house, Minnie is busy putting the finishing touches on a teddy bear she's making for Mickey to take with him on his next sea expedition. Donald and Daisy visit to help with preparations, but Donald accidentally rips one of the stuffed animals Minnie made, and the two of them rush to leave before she can find out (Cute Little Teddy Bear). Mickey arrives, and Minnie presents the bear to him. While thinking of a name for it, Minnie explains that she also made a duffel bag to carry it in, so they name it Duffy (Your Name is Duffy). Minnie also makes a note in a bottle so she can keep Mickey company while he's far away (A Special Gift (for Mickey)); however, the moment she hangs it around Duffy's neck, he comes to life (My Name is Duffy). They figure that Minnie's warm, loving heart gave the bottle a magic power that allowed it to happen (A Special Gift (for Minnie)); thrilled that Duffy is alive, they continue to get ready for the trip at sea (My Friend Duffy).

As Mickey and Duffy head to the port, Duffy meets TippyBlue, Cape Cod's mailbird. He explains that the world is full of dangerous things, and this scares Duffy. However, Mickey comforts him, explaining the concept of friendship to him to tell him that they'll be together no matter what happens (Friendship (Let's Help Each Other Out)). Afterwards, Mickey and Tippy both help Duffy decide where they want to go on the trip, describing destinations like Arabian Coast, Mermaid Lagoon, and Mediterranean Harbor (Let's Go on an Adventure). With that, the duo gets ready to set sail, but not without taking a group picture with their friends (Friendship (Reprise), My Friend Duffy (Finale)).

On a TV screen played before the show, TippyBlue introduces himself and briefly summarizes the story of Duffy.

Minnie crafts Duffy a present, which turns out to be ShellieMay.

Duffy, Tippy and Mickey go on a ship, where they meet Gelatoni, an artist cat. They soon land to Cape Cod, where Minnie welcomes them home.

Duffy the Disney Bear with Daisy Duck in the background (Act 2).

Duffy the Disney Bear wearing his sailor outfit made for the show. 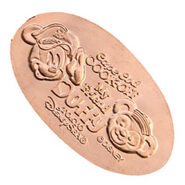 A pressed medallion made for My Friend Duffy, featuring Mickey and Duffy.

A Mickey My Friend Duffy plush. 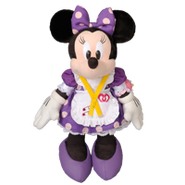 A Minnie My Friend Duffy plush.

The My Friend Duffy soundtrack.

The My Friend Duffy soundtrack (detail).

ShellieMay, Duffy and TippyBlue in My Friend Duffy.

Gelatoni in My Friend Duffy.

Duffy and Gelatoni in My Friend Duffy.

ShellieMay, Gelatoni, Duffy, Minnie and Mickey in My Friend Duffy.