Adventures of the Gummi Bears
"My Gummi Lies Over the Ocean"

When Tummi builds a boat, Gruffi tries to convince him to dismantle it, but reluctantly agrees to one single trip.

This trip takes an unexpected turn when a seamonster appears and drags them off course.

The detour takes them to a mysterious volcanic island that is surrounded by waterfalls, plunging into the ocean's abyss where a beach once used to be, which renders the island nearly inescapable.

But as dangerous as the trip turns out to be, it also happens to be a very lucky one; the sinking island is inhabited by another shipwrecked individual: An artist Gummi Bear by the name of Gusto. 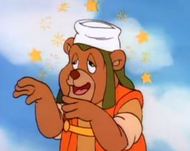 Retrieved from "https://disney.fandom.com/wiki/My_Gummi_Lies_Over_the_Ocean?oldid=4501618"
Community content is available under CC-BY-SA unless otherwise noted.