Mickey attempts to trim his little garden after it grows into an unruly, wild jungle.

Mickey walks over to a picture on the wall and looks at it. It is a picture of Mickey holding a hoe, posing next to his little garden. He kisses the picture and puts it back on the wall. It is time to prune his garden. He walks over to the back door and opens it. But a bunch of overgrown plants burst through the door. Mickey is surprised a looks through a book. He realises it has been 2.5 years since he planted it. But he decides to venture outside into the overgrown forest and head to the shed where he keeps his heavy-duty gardening tools. 87 days later, Mickey is still in the forest and can't find the shed anywhere. He tells the audience about his times in the forest: the bugs grew gigantic, the plants started eating meat, and how his food was poisonous. However, the most dangerous time in the forest was how a kind of creature was stalking Mickey, or was he just imagining it? The next day, Mickey was still wondering around the garden, when he saw the creature that had been stalking him. The creature jumps out of the bushes and chases Mickey throughout the forest. But a plant captures Mickey with its tongue and drags him towards its mouth. As Mickey struggled to stop the plant from dragging him towards it's teeth, the creature jumped up and landed right on top of the plant, crushing and killing it. Then it pounces on Mickey, who shakes in fear, but the creature licks him. Mickey, confused, stares at the creature. It shakes free and reveals to be Pluto, who had actually been protecting Mickey from the dangers. 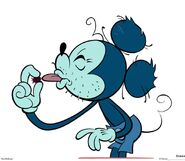 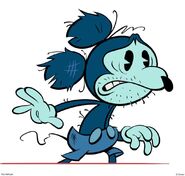 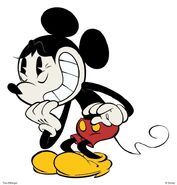 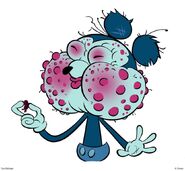