““More than any other project, I poured my soul into it. I opened myself up to all the things I love. The culture I grew up in, the music that I still, to this day, love dearly – it was all part of that. It was very personal for me as a filmmaker.””
“Barry Cook on the making of "My Peoples"”
―{{{3}}}

My Peoples (also known as Once in a Blue Moon, Elgin's Peoples, Angel and Her No Good Sister and A Few Good Ghosts) was a film developed in the late 1990s by Barry Cook, co-director of Mulan. Despite the fact that he even went as far as to hire voice actors, as well as musicians to score the film, it was scrapped in favor of Chicken Little in 2005.

Set in Appalachia, Texas in the 1940s, My Peoples was to have told the story of two feuding families: the Harpers and the McGees, whose two children, Elgin and Rose, fall in love. Elgin was to have dabbled in folk-art, creating dolls from various household objects which included the following.

Wishing that Elgin would forget about his daughter, Old Man McGee concocted a batch of his late mother's "Blue Moon Brew", intending to use it to erase Elgin's memory.

However, his potion accidentally brought the dolls to life instead, at which point Angel declared that she did not want to help Rose and Elgin get together and proceeded to leave town. Some of the dolls went after her in an attempt to get her to come back while others did what they could to help the couple, which included keeping Herbert Hollingshead, the man Rose's father tried to set her up with, away.

Five months after finishing his work on Mulan, Barry Cook began developing a pitch for an animated film based on a short story that he had previously wrote called The Ghost and the Gift which involved three children and a ghost helping an Appalachian couple get together. However, the idea was rejected by both Michael Eisner, the Disney CEO and Thomas Schumacher, the then-Head of Walt Disney Feature Animation. This was because Eisner thought that the story needed more conflict, while Schumacher thought that the cast was "too human" and the film would would better in live-action.

Looking back over the research he'd done on Appalachia, Cook remembered how many of the residents there dabbled in the creation of household-item induced dolls.

Thinking that these unusual creations would make a unique feature, he created a maquette of Angel which he hoped to use as a visual aid at the next story meeting. However, seeing as he was based at the studio's Florida Animation Branch, Barry Cook couldn't make it to Los Angeles to attend said meeting.

So, Cook placed the maquette in a violin case and had it delivered to L.A., at which point he phoned up an assistant, instructing him  to place it on the conference room table at the next story meeting. When the meeting came, Barry Cook related his revamped pitch to Thomas Schumacher over the phone and told him to open the case. Intrigued, Schumacher green-lighted My Peoples with a budget of $45 million. The reason that it was titled as such was because My Peoples had been the collective name of a group of dolls that were created by a deceased folk artist. Cook also thought that that title would suggest "a welcoming reference to one's family" which was one of the film's major themes.

The animation for My Peoples was to have been a mix of CGI and traditional animation with the dolls being computer-generated while the backgrounds as well as the human characters would be hand-drawn. The reason Cook wanted the film to be animated this way was because he did not like the look of current "completely-CGI" movies. They looked "too simple" in his words.[1]

One of the dolls that Barry Cook came up with, an over-the-top, Southern-accented preacher named Preacher Man did not make the final cut, due to the fact that Disney execs were worried that such a character might be considered offensive.

In January 2003, Thomas Schumacher resigned as Head of Animation and was replaced by former-Television Animation Head: David Stainton. Immediately, Stainton began to suggest several name changes for the film and found himself unimpressed with the film's storyreel, presented to him that following February so that eventually, he ordered the project retooled.

After taking a research trip to the Appalacian mountains, during which he heard a lot of ghost stories from people that he had visited, Cook gave the film a slight rewrite so that the dolls would be possessed by Elgin's deceased relatives. For example, his Uncle Ned took on the form of Abe, while his Aunt Edna Lee became Miss Spinster.

Due to this, the title was changed from My Peoples to A Few Good Ghosts. Barry Cook was somewhat unhappy with the change, due to the fact that he had a personal attachment to his original idea and wished he could stick with it. However, he understood that as a director, he had to make sacrifices.

On the other hand, David Stainton and Micheal Eisner were both impressed with the film's new storyline. After viewing the story reel for A Few Good Ghosts that November, Eisner told the film's production team "you folks finally have a movie here!" Stainton even went on to compare the quality of the film to the likes of Pixar's movies.

Unfortunately, later that month, David Stainton flew to the Florida Animation Branch to announce that the film would be cancelled in favor of Mark Dindal's Chicken Little. This was because he felt that the latter film, with its familiar story and characters would be able to reach more of a general audience. Stainton also announced that the Branch would be closing down the following year, prompting Cook to look for work elsewhere. My Peoples would become one of the main subjects of the Disney Editions book Disney Lost and Found: Exploring the Hidden Artwork from Never-Produced Animation.

““I’m probably not at liberty to discuss their involvement to a great degree, because that’s up to them,” but I admit that, of the actors listed, “we definitely talked to them and wanted them to be part of the film.””
“Barry Cook on the film's voice cast”
―{{{3}}}

Many people were hired to make the soundtrack for My Peoples, but its cancellation only lead to one released song in a storyboard, titled Tender Hearts. The song was to be in the prologue scene where it explains the story of the Harpers and the McGees.

The song explains that in 1811, the Harpers and the McGees lived next door to each other until one day an unknown event happened (though it's implied that a pig was either stolen or there was a misunderstanding involving a pig) that caused the two old men of the respective families to fight, leading both families to fight verbally and physically. Until, a girl from the Harper family and a boy from the McGee family fell in love with each other. The two would meet up together, showing one scene where the girl gives the boy a chicken, while the boy gives the girl a hammer.

The next day, the McGees' new chicken laid a blue egg, that the family immediately assumed was a curse put on the family by the Harpers. The old man of the McGee clan berates the boy. However, the two continue to see each other and he even proposes to the Harper girl, believing the curse to be a "silly superstition," until lightning struck a tree, causing the couple to run off until they were grabbed by a branch and presumably eaten by the storm, vanishing. The animatic and song end with Old Man McGee looking at the blue egg shells, sadly staring out the window of his home, where the tree has been split into two by the lightning.

Bluegrass musician Ricky Skaggs was hired as music consultant and together with Marty Stuart and Hank Williams III to compose the film's songs. Barry Cook also wanted fiddler Mark O'Connor to provide some music, but never got the chance to ask him.

Early sketch of the dolls that includes Preacher Man

A concept for Abe modeled after Grimsby from The Little Mermaid

Concept art of Good O'Boy and his junkyard home

Poster artwork displaying one of the film's alternate titles 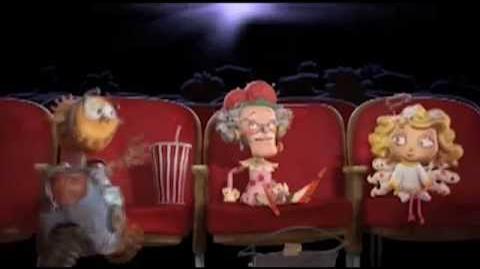 Animatics by Armand Serrano for "My Peoples"

Edna Lee My Peoples
Add a photo to this gallery

Retrieved from "https://disney.fandom.com/wiki/My_Peoples?oldid=4470994"
Community content is available under CC-BY-SA unless otherwise noted.