September 4, 2001
Mysterious Island is a "port-of-call" (themed land) at Tokyo DisneySea in the Tokyo Disney Resort. It is located within the caldera of Mount Prometheus, a huge volcano that serves as the park's icon.

This Island is the one from Jules Verne's novel, The Mysterious Island, which is Captain Nemo's lair, as the reader finally discovers. It is also known as Vulcania Island, as featured in the Disney movie 20,000 Leagues Under the Sea. When guests enter the Island, they discover Nemo's secret base, complete with a harbor for his Nautilus, as well as a lab inside the volcano, known as Mount Prometheus. Nemo is indeed both exploring the depths of the Sea and of the Earth, which allows guests to experience two of Verne's most famous adventures: 20,000 Leagues Under the Sea and Journey to the Center of the Earth.

Despite its name, Mysterious Island is not an actual island. It is instead built into the side of Mount Prometheus. This volcano is "active" (since bursts of fire can be seen escaping from the top, bursts of steam from cracks in its side, or bursts of water from the lake). The area has little greenery, and is mostly rocks and ornaments (as one can see it in the movie). 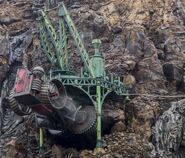 Retrieved from "https://disney.fandom.com/wiki/Mysterious_Island?oldid=4228620"
Community content is available under CC-BY-SA unless otherwise noted.