Lord Henry Mystic
Mystic Manor is a haunted house-themed attraction in the Mystic Point section of Hong Kong Disneyland. Although the ride isn't scary, it is considered enchanted. The attraction soft-opened on April 20, 2013, and officially opened on May 17.

The attraction features a "trackless" ride system, using RFID technology. Since it is a trackless ride, each time you ride, you will be taken to a different room. It features a musical score by Danny Elfman.

Continuing the Society of Explorers and Adventurers theme of Tokyo DisneySea, the attraction tells the story of Lord Henry Mystic and his monkey, Albert. Having recently acquired an enchanted music box, Albert opens the box and brings everything inside the house to life.

The facade is inspired by the Carson Mansion, located in Old Town, Eureka, California.

Mystic Manor is the mansion that Henry Mystic built on an uncharted tropical wilderness in New Guinea plagued with supernatural events. The mansion was built out of Henry's love for the unusual happenings and officially dubbed the area Mystic Point. Mystic Manor is where many of his findings, as well as some other members of the Society of Explorers and Adventurers have found, are displayed. As of recent events, Henry has bought in a new exhibit, a mysterious Balinese Music Box that has been rumored that its music brings inanimate objects to life.

As guests wait in the Queue, they will notice a portrait of Lord Henry Mystic and Albert, Henry's adorable pet, posted on the wall. Then, guests are arranged to move into the pre-show and watch a slide show narrated by Lord Mystic. He gives a short speech about the exhibition rooms and his latest collections and emphasizes an enchanted music box full of rare magic, which must be opened with caution. From time to time, Albert appears in different corners of the pre-show. After the presentation, guests are allowed to enter the load area and get on the century’s horseless carriages, the vehicles that take guests on a circle tour of the museum.

The first room is the Acquisitions and Cataloging Room, where Lord Mystic's collections are temporarily stored and await placement on shelves. The music box Lord Mystic mentioned is now in front of guests. Lord Mystic appears from a door in the middle of the room, looking for Albert. He greets the guests and acknowledges the music box before leaving to continue his search. Albert suddenly pops out and unlocks the box. The escaping magic dust floats in the air and brings life to all the artifacts.

The next room is the Music Room, in which many exotic musical instruments are displayed. A piano is placed in the center of the room. The magic dust gives life to instruments and music begins to play. The music follows the carriage and plays in the background for the remainder of the journey. Albert watches in fascination from atop a large pipe organ, curious to visit the rest of the house.

The next stop is the room of Mediterranean Antiquities. Paintings, ceramics, and Audio-Animatronic statues start to move under the influence of the magic. The carriages first pass a large painting portraying four people dining under a volcano. As the magic affects the painting, the volcano erupts, submerging the people in lava, who then clink their glasses. An amphora with Hercules fighting the Nemean Lion spins and rocks when the carriage passes. The carriages then pass a large mosaic of a beautiful woman who morphs into a frightening Medusa. This mosaic is a reference to the other Haunted Mansion attractions, which contain portraits of a woman changing to and from a Medusa.

The carriages move into to a Solarium Room. Albert tries to toy around with the Venus flytraps as he is holding a piece of banana to them, then all of a sudden a large Venus flytrap opens its jaw as it tries to bite the guests, the room then becomes pitch black. Soon afterward, the carriage enters the Slavic-Nordic Chamber and faces a Russian painting of spring. The face of the winter god Stribog appears out of the clouds, turns the painting from spring to winter, and blows freezing wind towards guests. The freezing wind actually leaves the painting and spreads ice throughout the entire room, finally gathering on a large mirror that shatters the guests' reflection. As this is a trackless ride, guests arrive in the same scene but mirrored.

The Arms & Armour room is full of weapons and armor that has come alive. First seen is a samurai armor wielding a katana that tries to hack Albert's head off, but he dodges each slash with success, then a cannon opens fire on the guests which knocks the carriage back and sends it spinning away. The carriages pass through a hallway containing three suits of armor, their helmets floating next to their bodies and singing along with the music. The carriage then moves in front of a large medieval crossbow, which loads and takes aim at the guests, knocking them into the next room. On the other side of the room, a Mongolian suit of armour can be seen holding a few helmets aloft and laughing evilly. Since this is a trackless ride, the carriages either pass through the hallway of three suits of knight armor or the Mongolian suit of armor.

In a swift move, guests enter the hall of Egyptian Antiquities. A sarcophagus of the Lost Pharaoh glows with an unearthly green glow as swarms of scarabs emerge from it. The scarabs cover all the lights and guests are stuck riding through the darkness. Guests can also see two hieroglyph tablets with Egyptian gods Horus and Isis in which both of tablets are animated until the room turns dark.

At the end of the darkness is the hall of Tribal Arts. A large tiki figure, the Lava God, dominates the room, spewing lava from its mouth. Two tiki poles stand on either side, as well as multiple other tiki statues. The room is full of chanting and tribal drums, all in tune with the music. Three tiki statues aim arrows and dart guns, which reveals Albert pinned to the opposite wall by their ammunition.

Then the carriages go into the Chinese Salon, where a giant jade Monkey King statue is brought to life and uses its staff to create a tornado, making the room spin and causing all the paintings in the salon to break apart and fall down. Guests also see a panda cub coming out of the panda painting and entering another one with two cranes. The vehicles continuously circle the room during this scene. Albert appears on a wall and the statue tries to hit him with a lightning bolt. This only succeeds in blowing away a portion of the wall, which crumbles, showing the dusk sky. Albert is then blown away from the manor and manages to hold onto a large harp as the enchanted music box suddenly appears. Albert jumps onto the box as the carriages move back to the Acquisitions and Cataloging Room.

The music climaxes as the magic flies back into the music box. Albert slams the lid shut and breathes a sigh of relief as the lights come back on, revealing a perfectly normal room. Lord Mystic then appears behind Albert, happy to have finally found him. He asks if Albert touched the music box, which Albert immediately denies. Wondering as to whether the legends regarding it are true, Lord Mystic thanks the guests for touring his home and bids them farewell as the vehicles move back into the station. 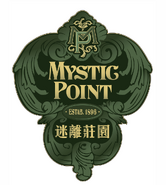