A short show is performed here where James Mystic, Henry's grandnephew, introduces performances from costumed performers from all over the world demonstrating their different cultures, including Mexican, Indian, Native American, Egyptian and Bulgarian forms of dance. During the 2013 Christmas season, "Adventures of Lord Henry", a special Shadow Puppetry show was performed at the Freight Depot, telling stories of Henry Mystic and Albert the Monkey's adventures in China, Egypt and Italy.

Besides the performances, the Freight Depot is home to several photo opportunities with large artifacts such as the head of Poseidon and "head in the hole" set-ups based on Egyptian and Mayan friezes. 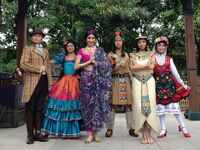 James Mystic and the cast of the Freight Depot show 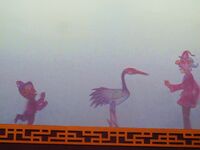