“You get to decide what kind of king you are going to be.”
―Nakia[src]

Nakia is a Marvel Comics character who first appears in the film Black Panther. She serves Wakanda as a spy around the world, and is also an ally and girlfriend of T'Challa. She is played by Lupita Nyong'o. 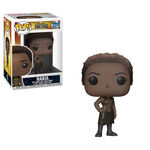