Disney Wiki
Register
Don't have an account?
Sign In
Advertisement
in: Article of the week, Characters, Raya and the Last Dragon characters,
and 23 more
English

The Druun, disobedience in her ranks, being insulted, formal wear, hurting people

“She's the backstabbing Binturi that broke the world.”
―Raya to Sisu about Namaari.[src]

Namaari is an antagonist appearing in Disney's 2021 animated feature film, Raya and the Last Dragon. The daughter of Chief Virana, she is the princess of Kumandra's Fang. Since childhood, Namaari has envied Heart's prosperity. Believing the Dragon Gem to be the source of their opulence, she plotted to steal it and use its power to expand Fang's fortunes. Though her cause was noble, Namaari's willingness to perform underhanded deeds to accomplish her mission made her a dangerous adversary.

Namaari was raised in Fang by her single mother, Virana. What became of the father is unknown. From an early age, Namaari revered the long-deceased dragons that once inhabited Kumandra. She owned various artifacts related to the serpentine beings, including a scroll detailing the legend of Sisu and a necklace bearing the water dragon's likeness.

As an adult, Namaari commanded her own unit of Fang soldiers and worked diligently to sustain her homeland's survival. As both a warrior and a leader, Namaari was revered by her people. She was particularly popular amongst children. The dialogue suggests that Namaari had little in the way of actual friends. Her only known companion was Serlot, a cat-like creature that served as her steed.

Brilliant, calculating and a formidable warrior, Namaari is Raya's unrelenting nemesis. She is the daughter of the Chief of the Fang lands and is determined to do whatever it takes to protect her people. However, down deep, she holds a secret love for dragons.

Namaari is a mature young woman who takes great excellence in her leadership. Like Raya, Namaari loves dragons, especially Sisu, and claims to be a “dragon nerd”. Namaari wants the world to be a better place for her people, unlike how Raya and Benja see it. She goes to great lengths to gain her mother's appreciation, even going through betrayal in her youth. Although she appears distrustful to many people, Namaari is really a caring person, who wants the best for her kingdom, people, and family. Even after her past actions, she still admires and believes in Sisu to help fix the world.

Namaari is a young Southeast Asian girl of average height with a slender, slightly muscular build, tan skin, short black hair with a side shave cut, and dark brown eyes. She is noticeably taller than Raya. She usually wears a long, pierced earring on her left ear, a beige tank top, a gold belt with a crimson sash, baggy pants, dark boots, and gold arm bracelets on both of her biceps.

Namaari is a skilled martial artist. According to a conversation with Raya, she prefers fighting with blades over hand-to-hand combat, yet is perfectly capable of besting the former that way in single combat. She is agile and shows great reflexes in combat. Despite hand-to-hand combat, Namaari also possesses her main weapons to fight:

Namaari is first seen attending a feast of having all the tribes of Kumandra being reunited together just as Virana, the Chief of Fang, introduces Namaari to Raya. She later goes in a conversation with Raya, explaining that she and Raya both have single parents who are terrible at telling jokes. As Raya explains to her that she and Namaari are both in possession of Sisu, she explains to Raya that according to her own kingdom's legend, Sisu is still roaming around. Namaari opens her scroll and tells her the legend that after the Mighty Sisudatu blasted away all the Druun, she fell into the water and floated downstream as legend says that she is now resting at the river's end just as she hopes that things would feel better when a dragon returned to Kumandra.

As Raya takes Namaari to the chamber where the Dragon Gem rests, Namaari betrays her just as she plans to do what is right for Fang. She engages in a duel against her, much to Tuk Tuk's anger for their feud, which causes the tribes to feud again after launching a flare into the air. Namaari manages to survive the Druun ambush after Raya and Tuk Tuk venture off to restore the Dragon Gem before Kumandra falls.

Arriving at the land of Tail, Namaari, now grown up, rides on her trusty Serlot along with a group of Fang mercenaries who also ride on the same cat-like creature as Namaari's, just as Namaari and her mercenaries plan to go after Raya who is on her quest to restore the Gem. Later, Namaari and a group of mercenaries arrive at the chamber where piece of the Dragon Gem on the hands of the Tail chief's skeleton where she overhears Raya devising a plan to Sisu to escape from Namaari and her troops to which she stares at Sisu (in her human form), to which she does not recognize that Sisu turned into a human just as Namaari sends her troops to seize her to which Raya and Sisu manage to escape from Namaari and her soldiers.

Upon noticing the three escape with Boun, a fellow mercenary tells Namaari that Raya and her friends have the Gem pieces as Raya, Sisu, and Tuk Tuk are on their way to Talon just as Namaari and troops retreat back to Fang to speak to Chief Virana.

On their way to Fang, Namaari and her troops walk past numerous dragon statues that were petrified by the Druun a long time ago as Namaari and her mercenaries continue returning to Fang.

Upon arriving at Fang, Namaari approaches her mother Virana, who explains to her that she located Raya seeking the gem pieces to restore the Gem just as she brings in a group of Fang warriors to go after her just before Virana tells her to look at the canals around the palace protecting the kingdom from the Druun just as Namaari explains to her mother about General Atitãya's decision to expand the kingdom to secure Fang's future as the only decision she thought of just as Virana tells Atitãya to ready her Royal Army thanks to Namaari's plan.

Arriving at the Land of Spine, Namaari arrives and alerts a group of Spine soldiers to hunt down Raya only to notice that the Spine soldiers have already been petrified by the Druun as they are unable to attack. After Raya tells Tong to protect her friends, she approaches Namaari, who is readying her mercenaries to fire their flaming arrows on the wooded gate. Namaari engages in a confrontation against Raya at Spine during a duel against the two princesses to which after a tough battle, Sisu arrives and roars at Namaari just as Raya escapes from her via Shrimporium.

Back at Fang, Namaari goes into a conversation about her encounter with her mother, to which Virana explains to her daughter that if she had Sisu and the gem pieces reunited, everything would be forgiven and Kumandra would be saved, but the most important thing is that her people should remain safe.

The next day, Raya talks with Namaari to confirm that she is on her side to which she hands Raya the last piece of the Dragon Gem only to betray her again as Namaari grabs a crossbow to fire an arrow at Sisu only to be briefly halted by Raya's friends. Raya then throws her father's sword at Namaari's crossbow, to which her arrow also hits Sisu, causing her to fall to her death. With Sisu gone, the water disappears and the Druun arrive at Fang. Raya angrily confronts Namari for her betrayal, with Namari (having just witness her mother's petrification by the Druun) also pointing Raya's share in the blame for her inability to trust others. With the Druun back at Fang, Namaari engages in a duel against Raya for betraying her just before she spares her. Furthermore, Namaari manages to help Raya fight against the Druun to which the gem's magic continues fading off. Raya tells Namaari to trust her as the Druun continue to petrify everyone in Fang as Raya tells Namaari to trust her just as her friends get along with her as they become petrified with Namaari the last survivor attempting to reunite all the Dragon Gem pieces before being petrified.

With all the pieces of the Dragon Gem reunited, the Druun are wiped away once again, just as Namaari is revived alongside everyone in Kumandra. Namaari remorsefully reforms with Sisu and gets along with Raya's friends. She is later seen visiting the Kingdom of Heart with everyone else in rejoice just as the tribes are reunited together.

Namaari with her mother, Chief Virana.

Namaari face to face with an angry Sisu. 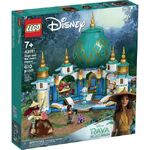 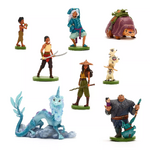 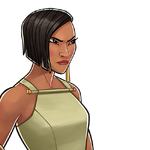