To race and sled

Her teeth and claws

Marries Demon and becomes a mother to 4 puppies

"Well I like him." (in Ted's crazy dream)
Nana is a minor character from Disney's 2002 comedy movie, Snow Dogs. She quickly latched onto Ted, perhaps his scent reminded her of her late mistress, Lucy. She quickly became Ted's favorite, enjoying getting to ride in the car as the rest of the dogs had to pull the car down the street. Even though she wasn't a Siberian Husky, she wanted to join the team, but wasn't given the chance until Ted needed her to be lead dog in his rescue effort. When she and the team were returning home with their mushers, the sled slipped off the cliff. Working with Demon, the team managed to save the sled and mushers, bringing them to safety. Her efforts impressed Demon, who later "married" her and had four puppies together. 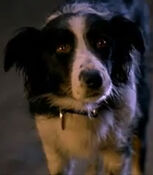 Nana begging for food from Ted

Retrieved from "https://disney.fandom.com/wiki/Nana_(Snow_Dogs)?oldid=3825276"
Community content is available under CC-BY-SA unless otherwise noted.