Nancy is a character from Halloweentown High.

After Marnie, Dylan, Sophie, Gwen and Aggie permanently open the portal between the human realm and Halloweentown, Marnie suggests to the Halloweentown Council that several students from Halloweentown be allowed to attend high school in the human realm. Nancy is a Wood Nymph chosen to be one of these students, alongside an Ogre named Chester, a Troll named Natalie, a Werecat named Jessica, a Witch named Cassie, a Warlock named Ethan, a Gremlin named Bobby, a Zombie named Zachary, and a Werewolf named Pete.

Upon arrival at her new school, Nancy is provided a disguise that hides her identity as a Wood Nymph and is told that she is a foreign exchange student from Canada - though she, like many of the other Halloweentown students end up spending most of her time in apart from the rest of the student body. This prompts Marnie to encourage everyone to get involved in extracurricular activities in order to socialize, suggesting that Nancy join the Gardening Club because of her connection to nature.

During a visit to the local mall, Nancy is offended by the portrayal of creatures at a Halloween store, something that leads to Ethan picking a fight with a couple of guys saying that everything related to Halloween is for freaks. During the scuffle, Edgar Dalloway floods the scene with purple smoke, allowing Ethan to plunge an iron dagger into one of the pumpkins in the display as his father had told him. Once Aggie clears the smoke, it reveals Nancy and the other students for what they really are, prompting a hasty retreat back to the Piper-Cromwell family home. Following Cassie's kidnapping at Edgar's hand, many of the Halloweentown students returned home - including Nancy - with only Pete, Chester, Natalie, and Ethan remaining. 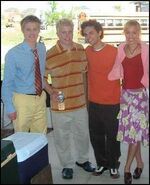 Retrieved from "https://disney.fandom.com/wiki/Nancy_(Halloweentown)?oldid=4013536"
Community content is available under CC-BY-SA unless otherwise noted.