Lucy and Jack
Nancy Jean Cartwright is an American actress and voice actress. She is best known for her long-running role as Bart Simpson in the popular Fox animated sitcom The Simpsons, as well as numerous other characters, including Nelson Muntz, Ralph Wiggum, Todd Flanders, Kearney Zzyzwicz, and Database.

In becoming a voice-over artist for animation, she was mentored by Daws Butler. It was at Hanna-Barbera Productions where she began her professional voice acting career (in which she played Gloria Glad in that studio's animated adaptation of Richie Rich). Outside of The Simpsons, her voice credits since then have included Daffney Gillfin in Snorks, Bright Eyes in the 1986 series Pound Puppies, Mindy in the Warner Bros. animated series Animaniacs, and Chuckie Finster in the Nickelodeon series Rugrats Season 8 and its spin-off, All Grown Up!, the new 2021 Rugrats series (taking over the role in 2002 after the retirement of Christine Cavanaugh).

Her Disney roles include voicing the Toon Shoe in Who Framed Roger Rabbit, Pistol Pete in Goof Troop, Fawn Deer in Bonkers, Raw Toonage Rufus in Kim Possible, Todd Daring in The Replacements, Pumbaa Jr. in Timon & Pumbaa, Fred Bitters in Teacher's Pet, Phantasmo and Shortstuff in Lilo & Stitch: The Series, and Goldilocks in The 7D. She also provided an additional voice in The Little Mermaid.

She reprised her role as Rufus in the 2019 live-action adaption of Kim Possible.

She is also the aunt of actress and singer Sabrina Carpenter. 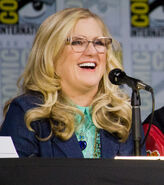