Marries Prince Edward and lives happily ever after in Andalasia.

"Kiss her, Robert! It's okay."
Nancy Tremaine is a character in the 2007 film Enchanted.

Nancy was portrayed as both a New Yorker and a dreamer of happily ever afters. She was shown to be very happy when Robert Philip gave her Giselle's bouquet with live doves, and was elated at the prospect of going to the King and Queen's Ball with Robert. This was seen again when Giselle was unconscious from the poisoned apple, she eventually learned of how much she and Robert were in love and decided for his happiness to let him kiss her awake to help her, and have their fairytale ending. Nancy owned a fabric store making dresses, which after she left, became Andalasia Designs, run by Giselle. In the end, she ended up marrying Edward and fell in love with him for his truly charming and Princely qualities. At the wedding, her cell phone rang, and after noticing the really good reception, she threw it away, and shared her true love's kiss.

In the beginning of the film, Nancy is in a 5-year-long relationship with Robert. The morning after Giselle comes to New York City, she shows up at his apartment to take Morgan Philip to school and bond with each other. After seeing Giselle on top of Robert from the bathroom, she thinks he is cheating on her, and leaves.

After Giselle asks a pair of doves to give Nancy a bouquet from Robert and his invitation to go to the King and Queen's Ball, she comes around and comes to rather like this new spontaneous and romantic side of Robert she has not seen yet. At the ball, she is shown as having a wonderful time with Robert. When Giselle and Edward show up, she becomes infatuated with the charming nature of Edward, finding him very romantic. The two dance the King and Queen's waltz.

After, Edward and Giselle decide to leave, but not before Narissa in disguise, poisons Giselle. Nancy calls the 911 Emergency hotline asking for help. When true love's kiss from Edward does not work on Giselle, Nancy realizes that Giselle and Robert are truly made for each other, and gives Robert her permission to kiss Giselle awake, which leads to the climax of the film.

After the battle, Nancy sees Giselle's forgotten shoe. After putting on Giselle's shoe, Nancy realizes it fits so once again and noticing his chivalry and never-ceasing charm, she agrees to marry Edward. They are married in Andalasia and live happily ever after. 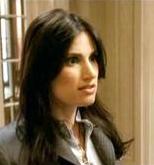 Retrieved from "https://disney.fandom.com/wiki/Nancy_Tremaine?oldid=3593190"
Community content is available under CC-BY-SA unless otherwise noted.