2005-present
Nathan Edward "Nate" Corddry is an American actor, voice actor, comedian, and TV personality. He is the younger brother of actor and comedian Rob Corddry.

Nate is known for his role as Adam Branch on the sitcom Harry's Law. He is also guest starred in sitcoms, such as Law & Order: Criminal Intent, The Daily Show, 30 Rock, and New Girl.

For Disney, he voiced Zed in the Disney XD animated series, Tron: Uprising.

Zed
(Tron: Uprising)
Add a photo to this gallery 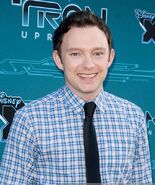 Nate Corddry at the premiere of Tron: Uprising in May 2012.
Add a photo to this gallery
Retrieved from "https://disney.fandom.com/wiki/Nate_Corddry?oldid=3776470"
Community content is available under CC-BY-SA unless otherwise noted.