Actor, comedian, dancer
Nathan James Barnatt is an American actor, comedian, and dancer. He is best known for his internet persona Keith Apicary, a nerdy, video game loving, weirdo; as well as Dad, a surreal enigmatic being. Nathan has acted on television is shows, such as Scream Queens, Community, Time Traveling Bong, Adam Ruins Everything, and Now Apocalypse.

For Disney, he played Wild Gil on Kirby Buckets, Bonesy in Just Roll With It, and Tased Man in the unaired pilot for New Warriors. He also voiced his Keith Apicary persona in the Animation Domination High-Def series Axe Cop and Lamort Blackstein in High School USA!. On ABC, he played Roger in Happy Endings and Randy Huffernan in Stumptown, on Fox, he played Buster in Lucifer, and on FXX, he played Boss in It's Always Sunny in Philadelphia. 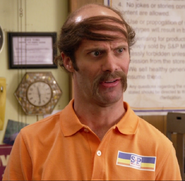