1993-present
Nathan Christopher Fillion is a Canadian-American actor and voice actor who is best known for his roles as Malcolm Reynolds on the Fox space western drama series Firefly in 2002 and its 2005 continuation film, Serenity, Captain Hammer in Dr. Horrible's Sing-Along Blog, Richard Castle on the ABC crime drama series Castle from 2009 to 2016, and for voicing Hal Jordan in various DC Comics animated movies. He currently stars as John Nolan in the ABC crime drama series The Rookie.

He is also known for his Disney roles listed below. 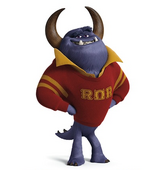 Sterling
(Cars 3)
Add a photo to this gallery

Fillion with Fozzie Bear in The Muppets.

Nathan Fillion behind the scenes of Monsters University.

Nathan Fillion at premiere of Guardians of the Galaxy in July 2014.

Nathan Fillion at premiere of Cars 3 in June 2017.

Retrieved from "https://disney.fandom.com/wiki/Nathan_Fillion?oldid=3987848"
Community content is available under CC-BY-SA unless otherwise noted.