Devlin Elliott (2015-present)
Joseph "Nathan" Lane is an American actor, comedian, and writer. He is known for his roles as Albert in The Birdcage, Max Bialystock in the musical The Producers, Ernie Smuntz in MouseHunt, Nathan Detroit in Guys and Dolls, Pseudolus in A Funny Thing Happened on the Way to the Forum, and his recurring roles on Modern Family, The Good Wife, and The People v. O. J. Simpson: American Crime Story as F. Lee Bailey. He also voiced Snowbell the cat in the Stuart Little films and Preed in Titan A.E.

For Disney, he was the original voice of Timon in The Lion King film franchise, reprising the role for the bonus material on The Lion King 1½ DVD and for The Lion King Bloopers and Outtakes. He also did Timon's voice on select episodes of the Timon & Pumbaa TV series and Spot Helperman in Teacher's Pet.

Additionally, he performed in Broadway musicals. One of his most notable musicals was Mel Brooks' Tony Award-winning musical The Producers (2001-2007), alongside Matthew Broderick. He also played Ed Chapman in the 1993 Touchstone Pictures film, Life with Mikey.

Tom Morrow
(Innoventions at Disneyland)
Add a photo to this gallery

Nathan Lane and Ernie Sabella behind the scenes of The Lion King. 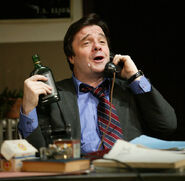 Nathan Lane during production of Simon Gray's Butley in January 2012.

Nathan Lane speaks at the Penny Dreadful: City of Angels panel at the Showtime portion of the 2020 Winter TCA Tour.
Add a photo to this gallery
Retrieved from "https://disney.fandom.com/wiki/Nathan_Lane?oldid=4469493"
Community content is available under CC-BY-SA unless otherwise noted.