Unsure of himself (in the beginning), loyal, funny, tolerant

To find Giselle and to kill her for his boss (formerly)
To help Edward, Pip and Giselle defeat Narissa (Successed)

Betrayal, His ex-boss's lies, being used

"Never fear my queen. I will stop him!"

In the beginning, Nathaniel was shown to be insecure and have very low self-esteem at the beginning of the film, having almost no respect or regard for himself, and only doing as Queen Narissa ordered him to do. He was infatuated with her, always putting her before even himself, and even willing to participate in her evil plans to make her happy. Narissa would usually bribe him into doing her wishes by falsely promising a happily ever after for him with herself.

After seeing a short portion of a television show, Nathaniel came to realize how little he likes himself and begins to think that there is another side to Queen Narissa. And after being mistreated by her once again, he realizes his mistakes and reveals both Narissa's plan and his involvement in it. And uses all these new feelings, along with the old ones to write a book, which many people liked.

Nathaniel was an insecure man who was hired by Queen Nerissa to ensure that Prince Edward would never meet a girl with whom he would share true love's kiss. He did so, by constantly setting trolls loose on the kingdom for Edward to vanquish. And he always did.

One particular day, he set lose a large troll, which Edward did best. However, after hearing Giselle's singing, Edward rode on to find her. A dismayed Nathaniel freed the troll to foil Edward. After a battle, the troll was stopped, and Edward met Giselle, both ready to be married the following morning.

After learning of this, Narissa came up with a plan to get rid of Giselle. She put Nathaniel in charge of making sure Giselle got to the castle safely, so she could transport her to New York, a place where there is no "happily ever afters."

After Pip told Prince Edward what happened to Giselle, Narissa watched both of them to make sure they didn't meet. Meanwhile, Nathaniel was made to work in her gardens, trimming hedges.

Under Narissa's orders, he followed Prince Edward to New York City, and, while trying to make sure Edward didn't listen to Pip's warnings, led him away from Giselle and attempted to kill her with three poisoned apples. Before he could use the last one, Narissa gave up on him and decided to take matters into her own hands, by coming to New York and kill Giselle herself.

After watching a soap opera on the television in The Grand Duke Hotel, he realized how little self-esteem and self-respect he has for himself. And ever since, he started to rethink his relationship with the Queen and realized that even though he has always treated her like a Queen, she has never acted like one. He realized what a viperous witch she was and revealed her evil plot to Edward at the King and Queen's Ball, only after Giselle took a bite from the last poisoned apple.

In the end, Nathaniel remained in New York, where he wrote a bestselling autobiography entitled My Royal Pain: Vanquishing the Evil Queen Within and lived happily ever after. 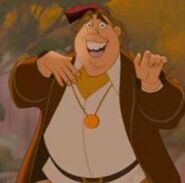 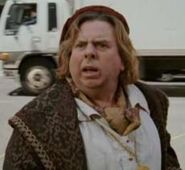 Retrieved from "https://disney.fandom.com/wiki/Nathaniel?oldid=4079775"
Community content is available under CC-BY-SA unless otherwise noted.