Chip 'n Dale Rescue Rangers
Once Upon a Time

Epic Mickey (as the Notilus)
Disney Heroes: Battle Mode (as a badge)

Sank
The Nautilus is the submarine commanded by Captain Nemo in the Disney 1954 film, 20,000 Leagues Under the Sea.

The Nautilus was built by Captain Nemo and his crew on the island of Vulcania after they escaped an unidentified prison camp "and fled beyond maps."

It sailed throughout the world's oceans, attacking various ships. As a result of its attacks, many believed it to be a sea monster. One expedition to try and find it resulted in the arrival of Pierre Aronnax, Ned Land, and Conseil, all three were captured and experienced many strange adventures, the most notable being an encounter with a Giant Squid. The Nautilus is also extremely advanced for its time, running off of nuclear power (as opposed to electricity in the original novel by Jules Verne).

It has an airlock chamber to allow divers to enter or leave the submarine, and it has a power compartment which houses the reactor. The Nautilus features air reservoirs which pumps air from the surface into the tanks.

When the Nautilus attacks a ship, its front viewing ports glows green and it charges towards the ship and rams into them. In some cases, the Nautilus's entire body glows green.

The submarine appeared in the episode, "A Creep in the Deep" as the ship of Captain Finn.

The Nautilus appears on the show. Henry Mills and Violet Morgan find a second version of the Fairytale book where there is an illustration representing Captain Nemo and the Nautilus. It was established that these stories exist in the Land of Untold Stories.

From 1955 to 1966 at Disneyland, the 20,000 Leagues Under the Sea exhibit in Tomorrowland featured many of the sets and props of the Nautilus for guests to view in person. Decades later for Disneyland Paris, the walkthrough was recreated complete with a submerged Nautilus facade, forming a mini-Jules Verne area with Discoveryland's From the Earth to the Moon inspired Space Mountain.

At the Magic Kingdom's Fantasyland, an updated version of Disneyland's Submarine Voyage would take on more of the influence of the film with copies of the Nautilus serving as vehicles and an encounter with the Giant Squid. After the attraction closed in 1994 and the vehicles were gradually removed, the hull of one Nautilus was cut apart and taken temporarily to Disney's Hollywood Studios for the Backlot Tour's preshow, before being removed and brought out for pin events. Two other Nautilus were sent to Castaway Cay to be submerged in the snorkeling lagoon, though the ocean has already taken it's toll on the vehicles. The rest were buried in an onsite landfill after being stripped of various parts for collectors.

In Disneyland Park (Paris), the submarine is located in a lagoon near Space Mountain: Mission 2. Guests enter what looks like a lighthouse, and proceed into the attraction through an underwater corridor. Six rooms are visited inside the Nautilus.

An area in Tokyo DisneySea inspired by Vulcania, the Nautilus appears in the lagoon, though it is not the facade for a walkthrough like in Disneyland Paris.

There is an illustration of the Nautilus in combat with the giant squid on a map of the Mediterranean ocean in this restaurant. Said map was created by Captain Mary Oceaneer, a member of the Society of Explorers and Adventurers.

The Nautilus is referenced in this bar, most notably in having its likeness used for a tiki-mug holding a drink known as The Nautilus.

The San Francisco newspaper reporting on the Nautilus attacks is hung in a display case within this bar.

In this bar is a portrait of the Nautilus in the Submarine Lagoon from 20,000 Leagues Under the Sea: Submarine Voyage. When the Nautilus drink is ordered, this portrait lights up as audio from the attraction plays.

The Nautilus appears under the name Notilus in the first area of Tomorrow City, where Mickey Mouse must raise it from the depths of a pool of thinner in a hidden cavern of ancient ruins. Mickey then rides the Notilus to the surface at the Tomorrow City Lagoon, by the Great Big Tomorrow exhibit.

Nautilus in the fog

Rising to the surface

Nautilus under attack by cannibals

Nautilus under attack by a Giant Squid

The Nautilus in Once Upon a Time

The Nautilus at Tokyo DisneySea

The Nautilus at the Magic Kingdom

The Nautilus in Disneyland Paris 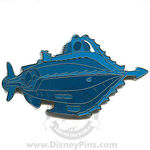 The Nautilus in a promo video from Tomorrowland