Disney Wiki
Register
Don't have an account?
Sign In
Advertisement
in: Characters, The Jungle Book characters, Males,
and 9 more

Pinnacle Rock within the wasteland

Food, being mean, getting what they want

Starvation, not getting what they want

Mahra (Mother)
Each other (brothers)

Ned, Jed, and Fred are Mahra's sons in the TV series Jungle Cubs.

Ned, Jed, Fred, and their mother live in Pinnacle Rock within the wasteland out side the jungle. The baboons often antagonizing the Jungle Cubs when they enter the wasteland.

Ned, Jed, and Fred first appeared in the episode "A Night in the Wasteland" Attempting to prove his courage after a joke by Louie and Baloo, Shere Khan vows to travel to Pinnacle Rock in the wasteland unaware that the ruthless baboon Mahra and her sons have returned.

The baboons reappear in the episode "Who Wants To Be A Baboon?" After being the victim of one too many jokes, Louie leaves the jungle and finds himself with in the wastelands he is quickly recruited by Ned, Jed, and Fred bringing him up to Pinnacle Rock to meet their mother Mahra who makes Louie her assistant.

Ned, Jed, and Fred last appearance in the series was the episode "Splendor in the Mud" after Winifred's uncle gets wounded by a mother rhino defending her calf from Winifred's herd Hathi journey to the wasteland to find the red clay which would help Winifred 's uncle injury. Hathi is ambushed by Ned, Jed, and Fred and force by the baboons into digging up grubs. 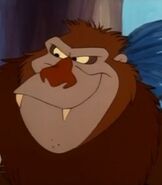 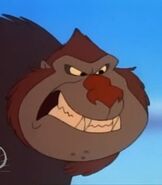 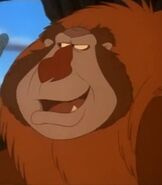