Douglas, Charles, Lennis, Walter, John, Blossom, Thomas, and Dorothy
Ned Thomas Beatty was an American actor, voice artist, and comedian. He appeared in more than 160 different films, where he is known for his work in various films, such as Deliverance, Superman: The Movie, Network, Friendly Fire, Last Train Home, Hear My Song, Cat on a Hot Tin Roof, Rango, Purple People Eater and others.

For Disney, he voiced Lotso in Disney/Pixar's Toy Story 3 and reprised his role in the video game. He also portrayed the Duke of Bridgewater in Back to Hannibal: The Return of Tom Sawyer and Huckleberry Finn, Wally Higgins in Road to Avonlea, Warden Wyatt in He Got Game, Josef Locke in Hear My Song, General Walt Whalen in Radioland Murders, and Sheriff Abe Connell in Where the Red Fern Grows. 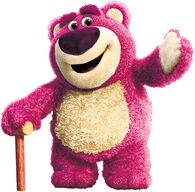 Beatty behind the scenes of Toy Story 3

Beatty with his character Lots-o'-Huggin' Bear