Ned Cauphee (Voiced by Fred Newman)[1] is one of Roger's friends and sidekicks in the animated show Doug. He is the smartest and most vocal of Roger's gang and his most distinguishable feature is the fact that he has two different-looking eyes.

Ned comes from a large family, having ten brothers and twin sisters, and is most easily identified by his full lips and one eye much larger than the other. Being the most intelligent member of Roger's gang, Ned is quick to point out the faults in Roger's plans. 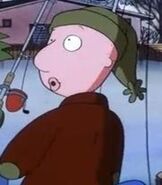 Retrieved from "https://disney.fandom.com/wiki/Ned_Cauphee?oldid=4354732"
Community content is available under CC-BY-SA unless otherwise noted.