This article is about Darkwing Duck's negative side. For the prime Negaduck or the episode, see Negaduck or Negaduck (episode).

Looks like Darkwing but with dark eyebrows, after being galvanized becomes black and white with black and red eyes

“I am the most fiendish terror that flaps in the darkest night, I am the skunk that pollutes your air! I AM...NEGADUCK!”
―After being galvanized

The Negatron version of Negaduck is the first antagonist from Darkwing Duck to use the name "Negaduck". While the second Negaduck was Darkwing's evil twin from a parallel universe known as the Negaverse, this Negaduck was a living manifestation of Darkwing's evil side. He appears only in the episode "Negaduck", and was also mentioned as "the original Negaduck" in the comic story arc Crisis on Infinite Darkwings.

Like the second Negaduck, Negaduck initially had no powers of his own but makes up for it with his sadistic temperament and penchant for destructive weaponry. After being galvanized by Megavolt's tronsplitter, he transforms into a being of pure negative energy which he can direct as energy blasts powerful enough to level an entire building. He also displayed some telekinetic abilities and limited weather control, being followed by a storm cloud everywhere he went.

While foiling a robbery by Megavolt, Darkwing was accidentally zapped by Megavolt's tronsplitter and separated into two separate beings; one good and one evil. Both Darkwings would make their way to Drake Mallard's home where, after causing general confusion among Drake's family and neighbors, Honker Muddlefoot was able to determine what had happened and that the only way to restore Darkwing to normal was to use the tronsplitter to merge the two halves back into one being. Not wanting to give up his freedom so easily, the Evil Darkwing escapes and after causing chaos throughout the city, tracked down Megavolt and tricked him into taking him to his hideout where Evil Darkwing attempted to smash the tronsplitter. During the resulting scuffle Evil Darkwing was zapped a second time by the tronsplitter which galvanized him into Negaduck and with his newfound powers began to lay waste to everything around him. Faced with the prospect of nothing left to steal if Negaduck destroys the entire city, Megavolt joined forces with the Good Darkwing and used the tronsplitter to galvanize him into "Posiduck" with powers the equal and opposite of Negaduck. As Posiduck uses his energy to restore and undo all the destruction Negaduck had unleashed, the two engaged in a battle of power until they were close enough together to be zapped a third time with the tronsplitter, re-merging them both back into one being. 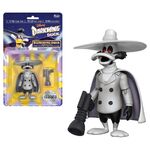 Retrieved from "https://disney.fandom.com/wiki/Negaduck_(Negatron_version)?oldid=4053985"
Community content is available under CC-BY-SA unless otherwise noted.