Gideon and Harper Michelle Burtka Harris
Neil Patrick Harris is an American actor, singer, director, and magician, who is best known for his roles as the titular character on the ABC comedy-drama series Doogie Howser, M.D. from 1989 to 1993, Barney Stinson on the CBS sitcom How I Met Your Mother from 2005 to 2014, and the titular character in the 2008 musical comedy-drama miniseries, Dr. Horrible's Sing-Along Blog. He is also well-known for voicing the Music Meister in Batman: The Brave and the Bold, Steve the Monkey in Cloudy with a Chance of Meatballs and its 2013 sequel, Lou the Beagle in Cats & Dogs: The Revenge of Kitty Galore, and Dr. Blowhole in the Nickelodeon series The Penguins of Madagascar, as well as the video game Dr. Blowhole Returns – Again!. Additionally, he played Patrick Winslow in the live-action Smurfs films and Count Olaf in the Netflix TV adaptation of Lemony Snicket's A Series of Unfortunate Events.

For Disney, Harris was the host of the California Screamin' attraction at Disney California Adventure. He also made guest appearances in Take Two with Phineas and Ferb, as well as the 2011 musical comedy film, The Muppets. Additionally, he voiced Moyo in The Legend of Tarzan and was mentioned in the Kirby Buckets episode "That Sinking Feeling". He also played Carl Jenkins in Starship Troopers and voiced Karre in Star Wars: Visions.

During the 60th anniversary of Disneyland, he served as the host of World of Color – Celebrate!. 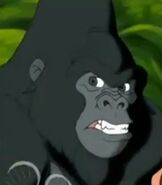 Moyo
(The Legend of Tarzan)

Harris with Huey, Dewey, and Louie on the cover of Disney Adventures (October 1991).