Transform her arms into weapons
Nemesis is a recurring character in the Disney animated series Hercules. She is the Olympian demi-goddess of Vengeance, and the Head of the Infernal Retribution Service whose main duty is to smite all and any mortal who disgusts, defies and/or disrespects the Olympian Gods.

Nemesis is incredibly devoted to her duties and enjoys the thrill of the hunt and smiting, becoming incredibly frustrated and impatient on missions that require only a tracking skill rather than her fighting ability.

Employing the ability to shape-shift her hands into weapons as well as various super-senses, Nemesis is an incredibly terrifying foe on the battlefield.

In "Hercules and the King For a Day," after Pan, king of the satyrs, fails to give offerings to Demeter, Nemesis is instructed to impose divine retribution to Pan. However, Pan tricks Philoctetes into taking his place as the king, and Nemesis, being unaware of the switch, attempts to smite Phil instead of him.

Luckily, Nemesis is then thwarted by Hercules and Demeter.

In "Hercules and the Romans," while Hercules was searching for a missing Icarus during a weekend, who was actually in Rome, Zeus orders Nemesis to help Hercules find Icarus. Hence, finding Icarus pretending to be a god in the Eternal City, Nemesis attempts relentlessly to smite him there because of it.

The Greek deities and Hercules himself once again stop her. 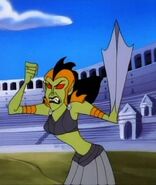