Disney Wiki
Register
Don't have an account?
Sign In
Advertisement
in: People, 1970s births, The Lion King,
and 10 more

Caspian
Neve Adrianne Campbell is a Canadian actress and voice actress. She is best known for her roles as Julia Salinger on the Fox teen drama series, Party of Five from 1994 to 2000, and as Sidney Prescott in the 1996 horror film, Scream, and its sequels.

For Disney, she voiced Kiara in the 1998 direct-to-video film, The Lion King II: Simba's Pride and portrayed Laura Sobiech in the upcoming 2020 film, Clouds. Her role in Scream was referenced in the Lizzie McGuire episode "I've Got Rhythmic".

Neve Campbell behind the scenes of The Lion King II: Simba's Pride. 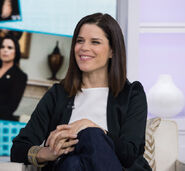