Disney Wiki
Register
Don't have an account?
Sign In
Advertisement
in: Locations, Jake and the Never Land Pirates locations

The Never Sea Twin Tunnel first appeared in the episode "The Key to Skull Rock" Izzy Jake, Cubby and Skully received a message and key from Peter Pan to unlock a treasure behind Skull Rock but unfortunately Captain Hook has his eyes on the key and swipes it from the sea pups forcing Jake and his crew to pursue the Jolly Roger into Blue Whale Way which a few of the whales blocked Bucky's path causing Hook a lead to the Never Sea Twin Tunnel and onward to Skull Rock. Izzy came up with the idea to use beach balls for the whales to play with so they move out of the way and Jake and his crew could catch up to Hook.

While Hook had his lead to the treasure he finally reached the Never Sea Twin Tunnel Mr. Smee suggest they sail through the larger tunnel but Hook was in to big of a hurry to reach the treasure to pay attention to Mr. Smee warning but he soon wish he had not only does the Jolly Roger get stuck with in the tunnel but Hook's old foe Tick-Tock the Crocodile was able to sneak aboard and attempt to devour him. Causing Hook and Smee to abandon ship with the crocodile in pursuit losing the key to Skull Rock in the process. Jake and crew reached the Twin Tunnel and sailed through the larger tunnel reclaimed the key to Skull Rock and rescued Hook and Smee from the crocodile to continue sailing to Skull Rock with Hook and Smee in pursuit. 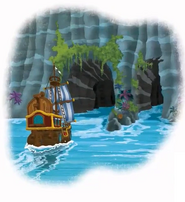 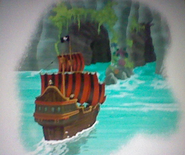