To obtain the X3 rocket to return to Germany

Women, acting, hiring someone to do the dirty work, Hollywood

Failing to get the rocket, interferences

"You bring me that rocket, and I'll double your price."
"Bloody amateurs."
"We're going to do what I think is necessary."
Neville Sinclair is the main antagonist in Disney's The Rocketeer. Initially appearing as a dashing Hollywood action star, Sinclair is revealed to be a ruthless Nazi agent sent by his superiors in Germany to steal the jetpack developed by Howard Hughes in the United States. He was portrayed by Timothy Dalton.

Sinclair hired crime boss Eddie Valentine and his hoods to steal the rocket pack but the men were unsuccessful due to the interference of the FBI. Sinclair used his main henchman, the hulking giant Lothar, to execute the man responsible for the failure, incurring the resentment of Valentine.

Learning that the airplane pilot, Cliff Secord, possesses the jetpack, Sinclair uses his womanizing skills to seduce Secord's estranged girlfriend, Jenny Blake, into giving up the whereabouts of Secord. Sinclair almost had the opportunity while dancing with Jenny at a dance club until Secord, as the Rocketeer, interfered with both Sinclair and Valentine's attempts at kidnapping Jenny. Despite the interference, Sinclair still kidnapped Jenny under the pretense of protecting her, but Jenny knocks him unconscious and tries to escape his house, only to discover his Nazi affiliations in a secret room. His allegiance exposed, Sinclair switched to a cold hearted and evil persona and ordered Lothar to bind and gag Jenny.

Sinclair, Valentine, and their respectice thugs called Secord over to an observatory to demand a trade off for Jenny, but Secord and Jenny exposed Sinclair's true allegiance to Valentine who subsequently drew the line at treason and demanded Sinclair to let Jenny go. Sinclair laughed and summoned hidden Nazi commandos to surround the group. Fortunately, equally hidden FBI agents revealed themselves and a gun battle erupted between the Feds and Valentine's men on one side and the Nazis on the other side. Sinclair and Lothar took Jenny with them to an awaiting zeppelin, where Sinclair started to endure the irritating gripings of his Gestapo superior.

Knowing that Secord managed to fly onboard and disable the rudder of the zeppelin, Sinclair ordered Lothar to deal with the American, only to find the unconscious body of Lothar crash through the cockpit window and knock the pilot out to his death. When his superior insulted him by calling him an actor, Sinclair revealed a sadistic side by shooting the Gestapo agent dead and throwing him out to loosen the weight of the zeppelin.

Confronted by Secord, Sinclair demanded he release the jet pack or he will kill Jenny. Secord did so but quickly engaged Sinclair in a fist fight. The fight was interrupted by Jenny attempting to shoot Sinclair with a flare gun which only set the zeppelin on fire. Choosing to save himself, Sinclair put on the jet pack and flew out, unaware that Secord had dislodged a piece of chewed up gum on a leaking fuel tank. In a burst of flame, Sinclair spun out of control and plummeted with a scream into the HOLLYWOODLAND sign, destroying himself and the -LAND portion of the sign. 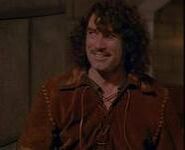 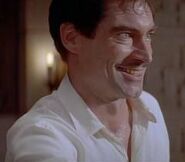 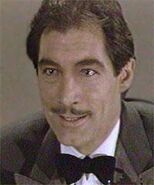 Retrieved from "https://disney.fandom.com/wiki/Neville_Sinclair?oldid=1790088"
Community content is available under CC-BY-SA unless otherwise noted.